I have just returned from three days cycling the 1918 battlefields with a group of ex-officers from the Royal Regiment of Wales. Our focus was primarily the Last Hundred Days, the most successful period of the war for the British Army as it forced the enemy into a series of crushing defeats culminating in Germany’s capitulation and the signing of the armistice in November 1918. 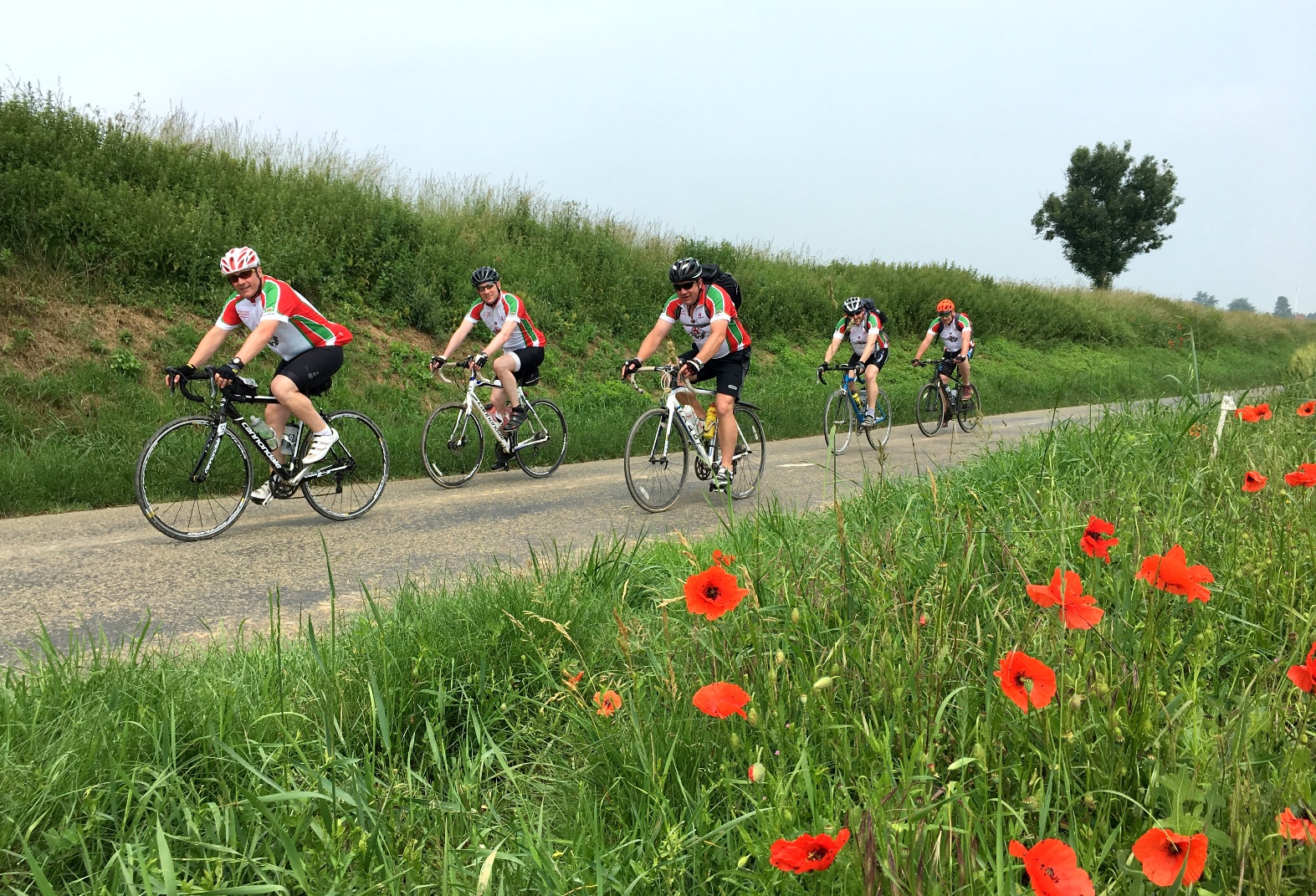 Cycling past poppies on the Somme

Our tour focussed on the Battle of Amiens (August 1918), the breaking of the Hindenburg Line (September – October 1918) and, a pet subject of mine, the Canadian push from Arras to Cambrai and beyond from August – October 1918. Knowing the ground well, I was sure that we would meet very few other battlefield visitors once away from the main memorials. I was right – we only saw one other couple in the entire three days!

Crossing this ground by bike gave me time to think. My overwhelming sense was that these men who fought such titanic baffles have been somewhat forgotten by so many. I have no doubt that over the three days of our tour the 1916 Somme battlefield and Ypres were inundated with their usual coach groups and pilgrims. On the bike, it felt like a travesty that the very men whose actions paved the way to ultimate victory are so neglected. The gentle undulating lanes and big, open fields have a resonance all of their own. It is sacred ground. 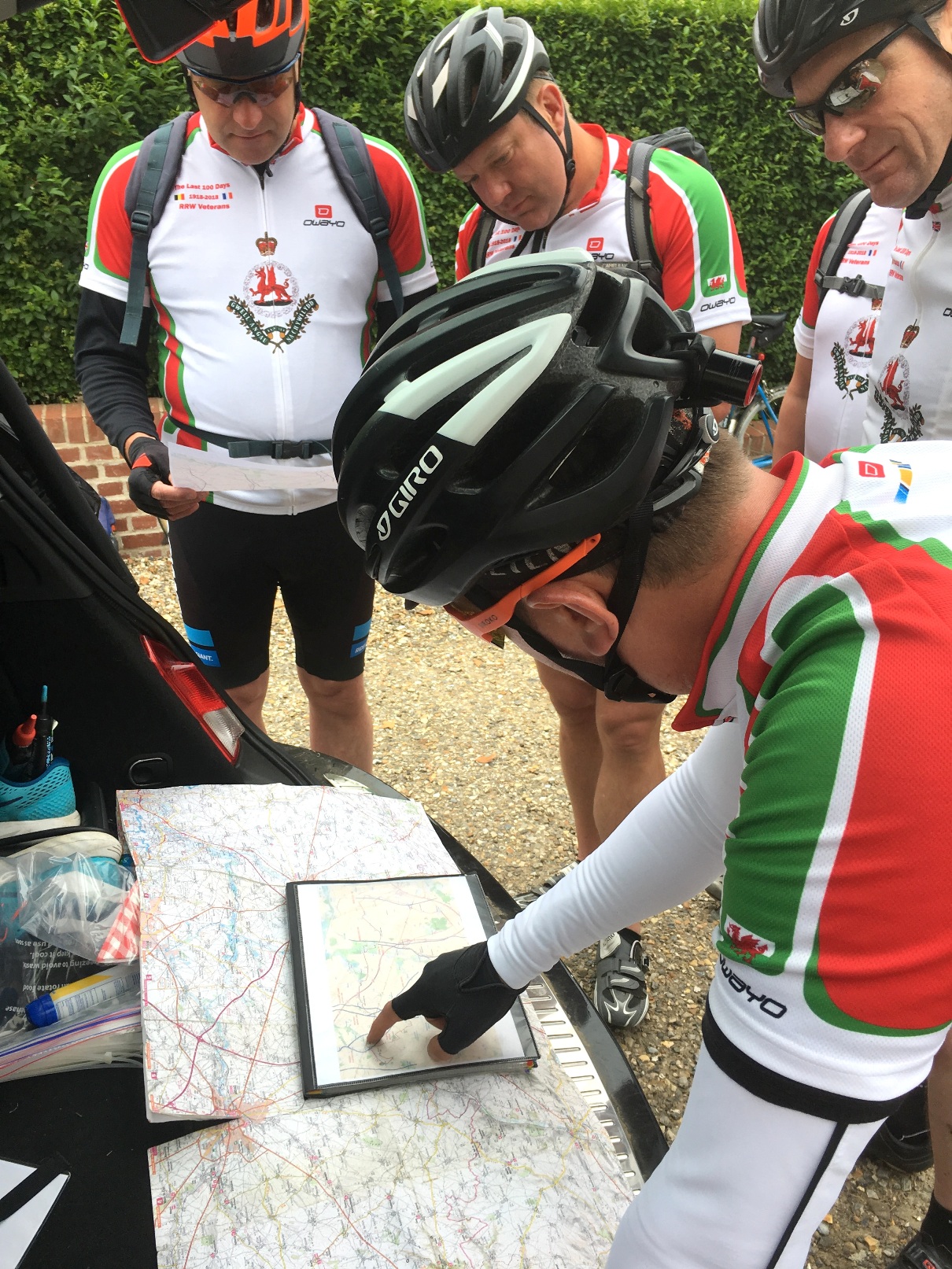 With the excellent self-catering holiday home Guillemont Halt as our base, we headed out with the bikes on the car roof every day to our starting point. Our first day covering the Battle of Amiens began at the Villers–Bretonneux Australian National Memorial before looping into the Canadian sector and following their tremendous advance of 8 August 1918. Favourite stops included Hangard Wood Cemetery where Pte John Croak VC, 13th Battalion (Royal Highlanders of Canada) is buried. 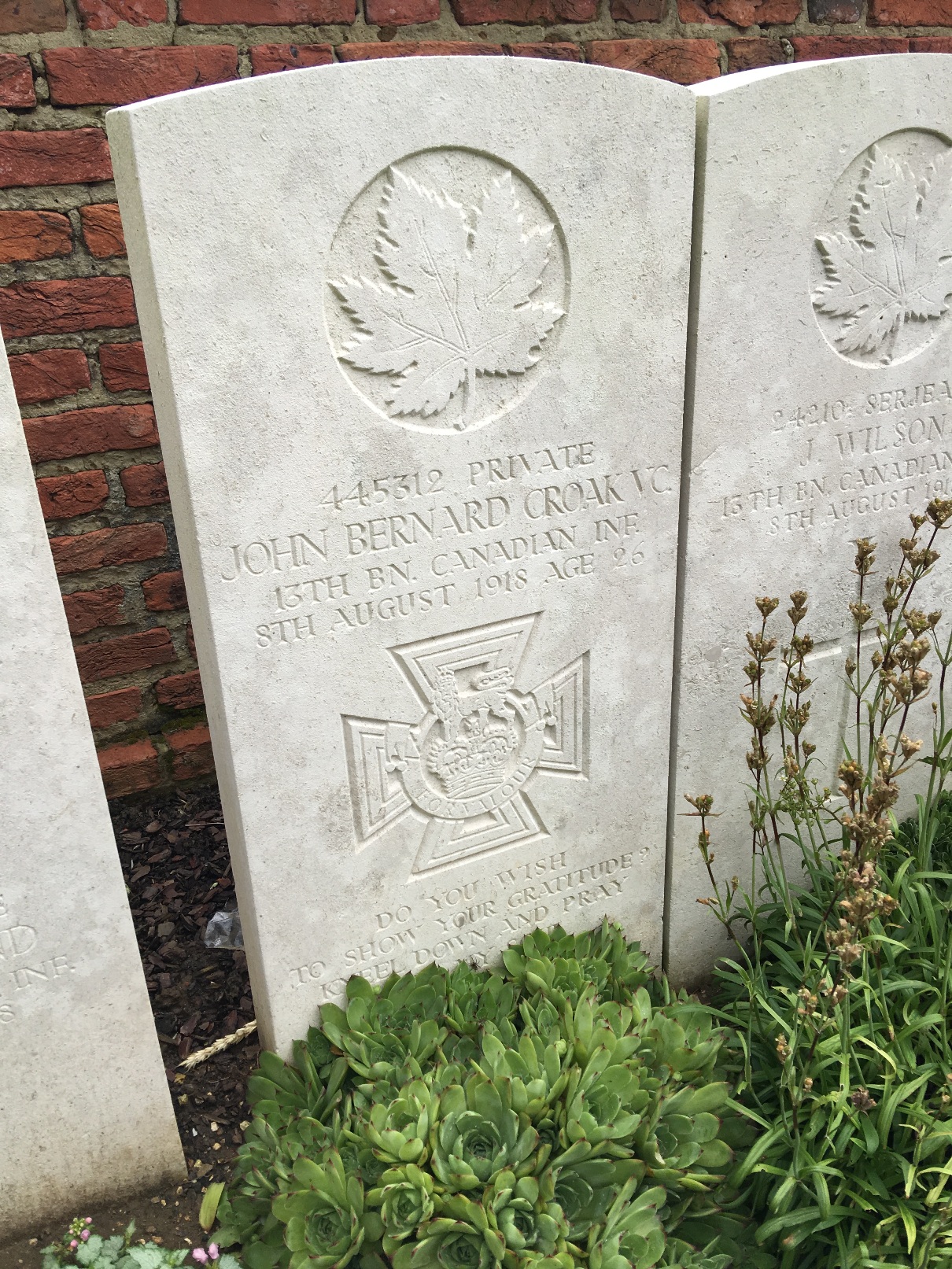 My grandfather fought with the 13th Battalion (although three years earlier) meaning I have an affinity with that unit. And who can fail to be impressed with the fighting capability of the hard drinking, hard living John Croak, described by a friend as ‘a remarkable man. There was not a phoney bone in his body. He was a roly-poly guy, feared nothing, and didn’t give a shit for anybody’.

Croak’s Victoria Cross Citation:
“For most conspicuous bravery in attack when having become separated from his section he encountered a machine-gun nest, which he bombed and silenced, taking the gun and crew prisoners. Shortly afterwards he was severely wounded, but refused to desist. Having rejoined his platoon, a very strong point, containing several machine guns, was encountered. Private Croak, however, seeing an opportunity, dashed forward alone and was almost immediately followed by the remainder of the platoon in a brilliant charge. He was the first to arrive at the trench line, into which he led his men, capturing three machine guns and bayoneting or capturing the entire garrison. The perseverance and valour of this gallant soldier, who was again severely wounded, and died of his wounds, were an inspiring example to all.”

Climbing out of Demuin to Hill 102 offered fabulous views of the battlefield before we pushed on to Beaucourt and Le Quesnel, the site of the Canadian memorial stone commemorating the battle. 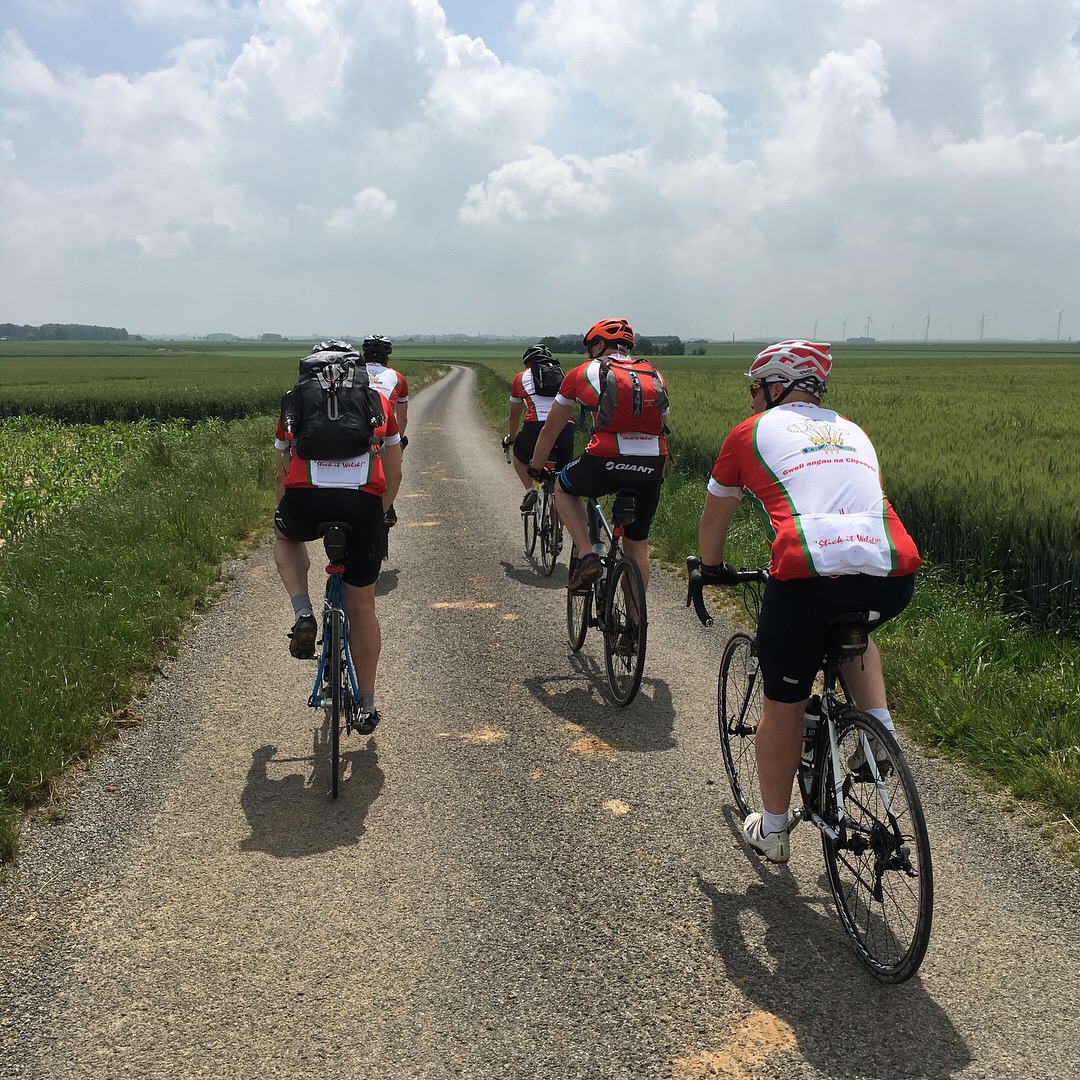 Cycling from Hill 102 to Beaucourt

After a picnic lunch in Hillside Cemetery on the Caix road we crossed the fields to the secluded and beautiful Manitoba Cemetery where we looked in detail at their 9 August attack on Hatchet Wood. 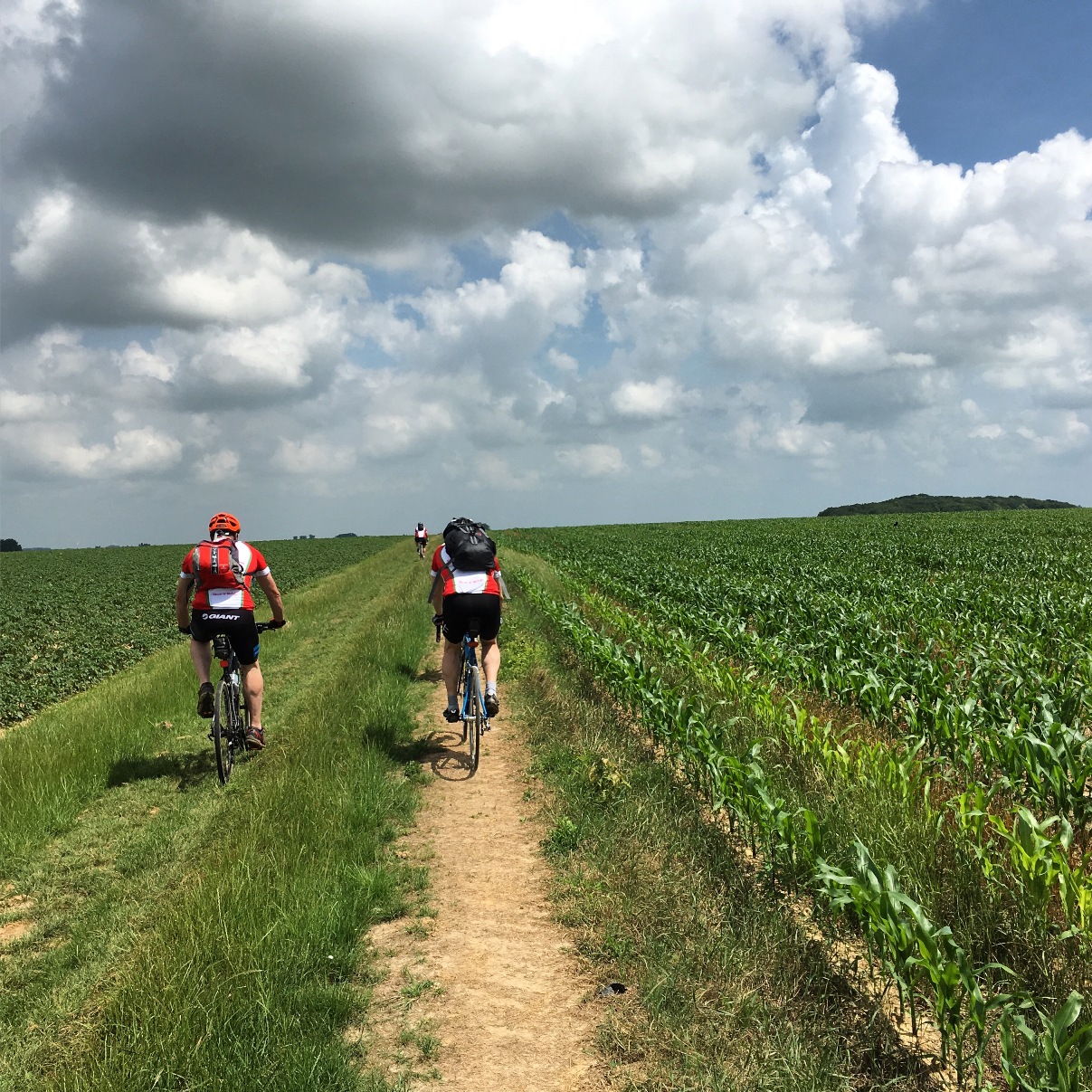 Battalion losses were heavy, particularly among officers (including their CO, former competitor from the 1908 Olympic Games, Lt-Col Thomas Raddall DSO). The attack was also the site of two 8th Battalion Victoria Cross actions – those of Fred Coppins and Alec Brereton. 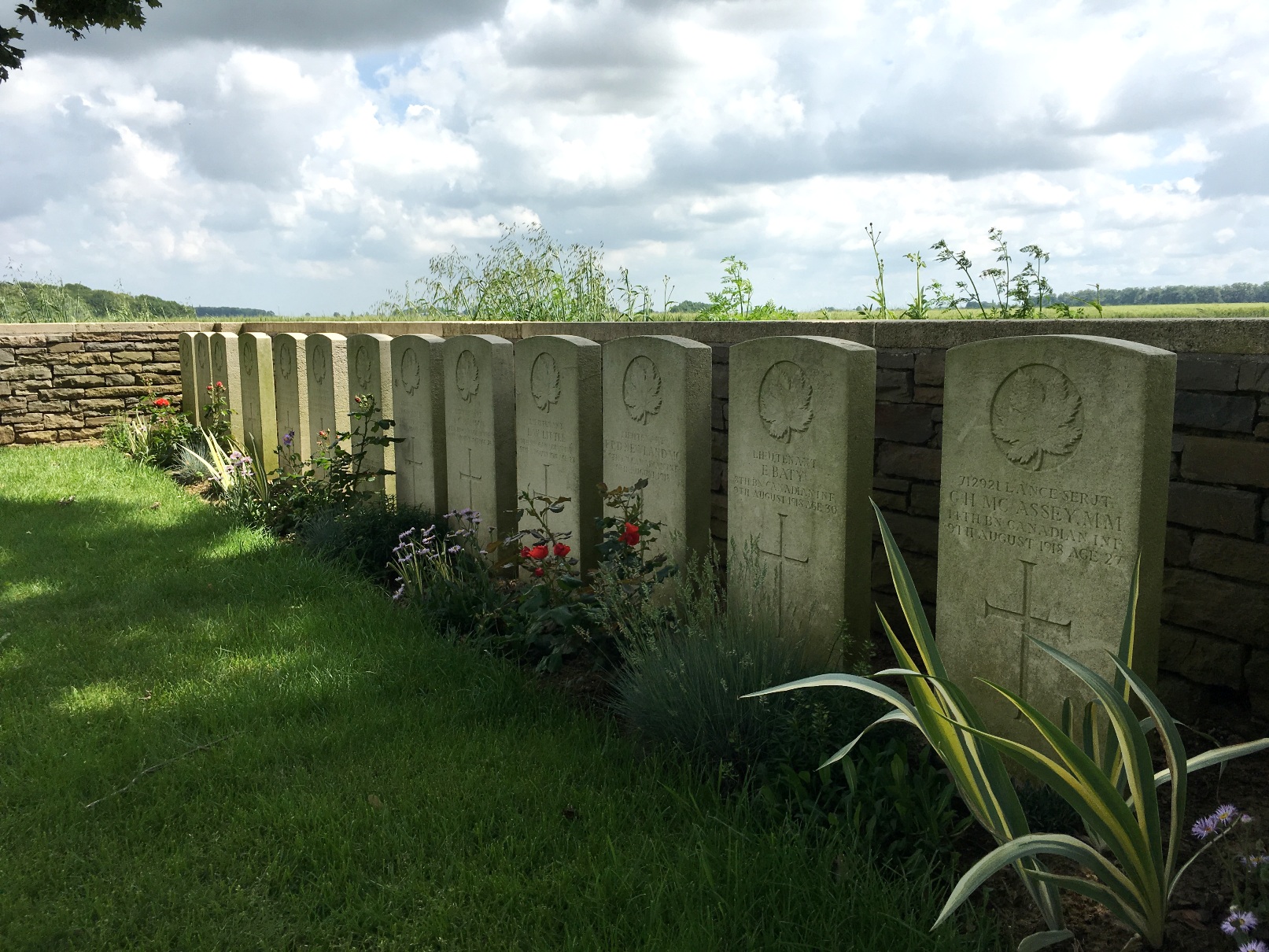 Having stopped at Warvillers Churchyard to visit the grave of Henry ‘Ducky’ Norwest MM & Bar, the Canadian sniper, we continued westwards before heading north into the Australian sector of the battlefield, passing through Harbonnières. Our final stop before returning to the cars was Le Hamel Memorial Park and a look at the Australian Corps’ innovative 4 July attack on the village. Once the bikes were fixed on the car we topped our day off by climbing the Villers–Bretonneux Memorial which offered superb views over the landscape over which we had just cycled. 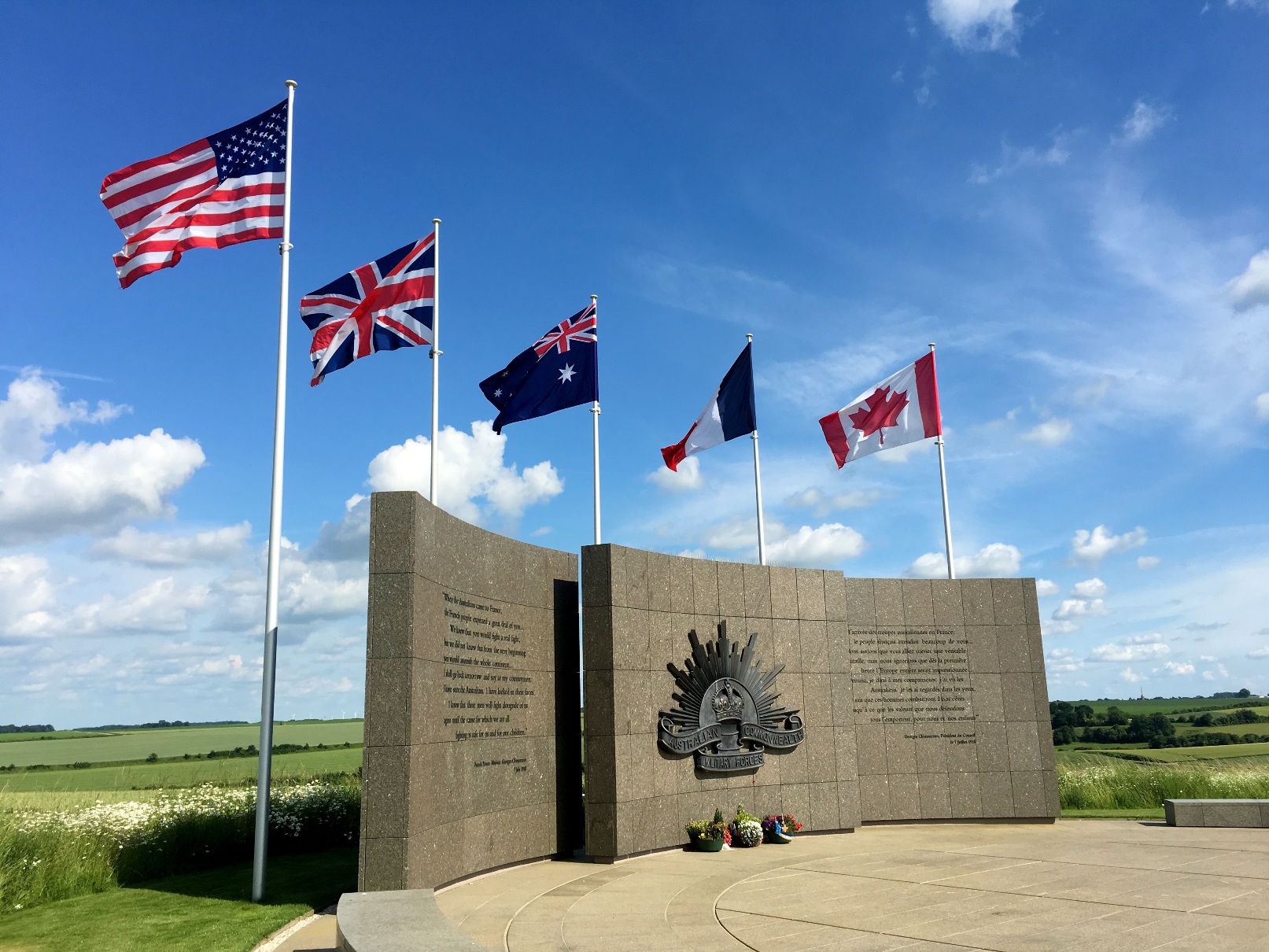 Day two focused on the breaking of the Hindenburg line on 29 September 1918. Starting in the Somme village of Epehy we headed east to my favourite cemetery on the Western Front – Pigeon Ravine with its neat rows of men of the 2nd Worcestershire Regiment killed close by. 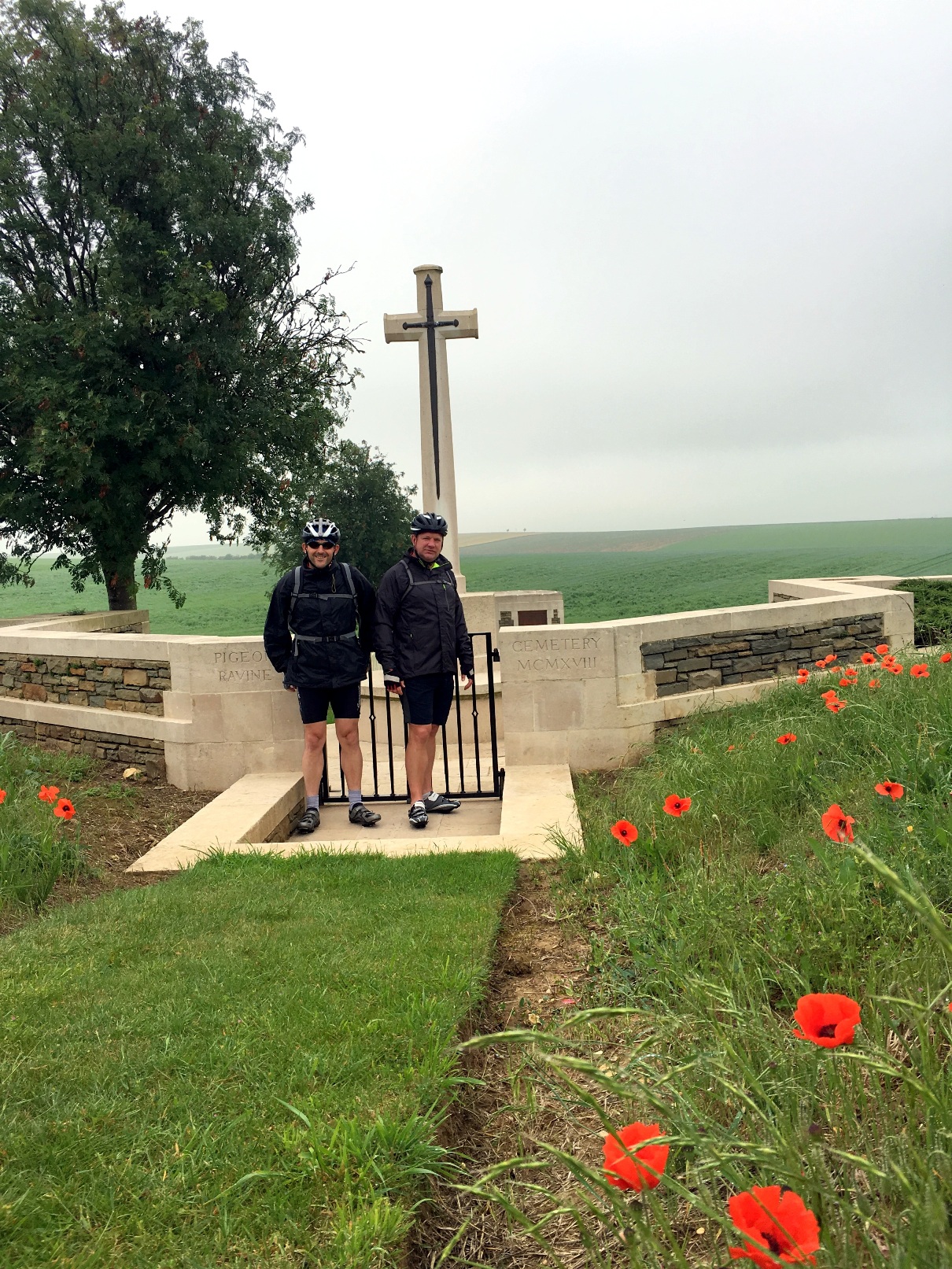 From there we rode up the grassy (and somewhat muddy) Gloster Road to Targelle Ravine and Villers-Guislain. The contrast between the quiet lane with banks laden with blood-red poppies and the accounts of the lane choked with dead and wounded was stark. 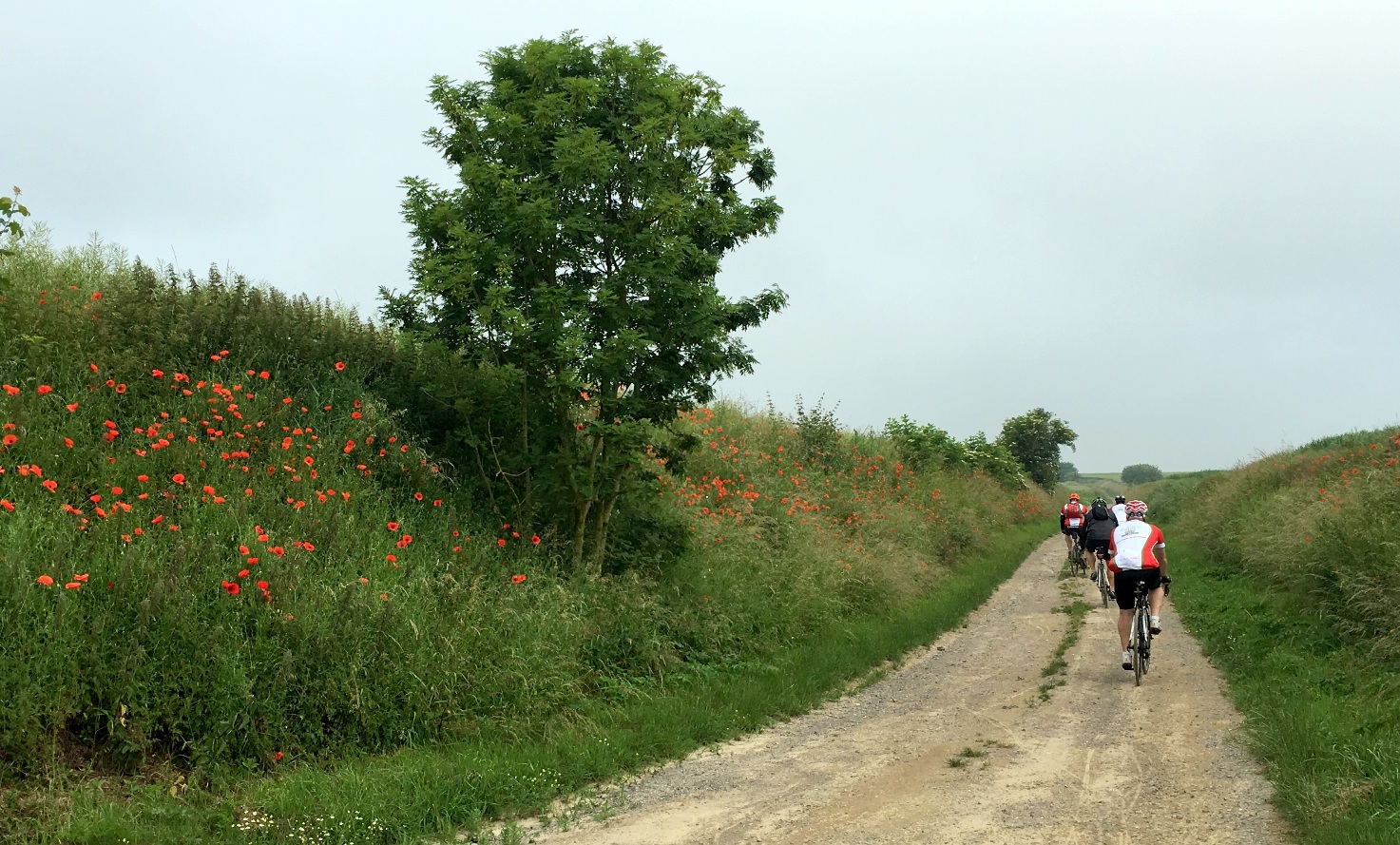 Riding up the sunken Gloster Road to Villers-Guislain

Other stops included the Somme American Cemetery at Bony, Riqueval Tunnel and Bridge before crossing the St-Quentin – Cambrai Road and following 32nd Division’s advance up Springbok Valley to Joncourt. 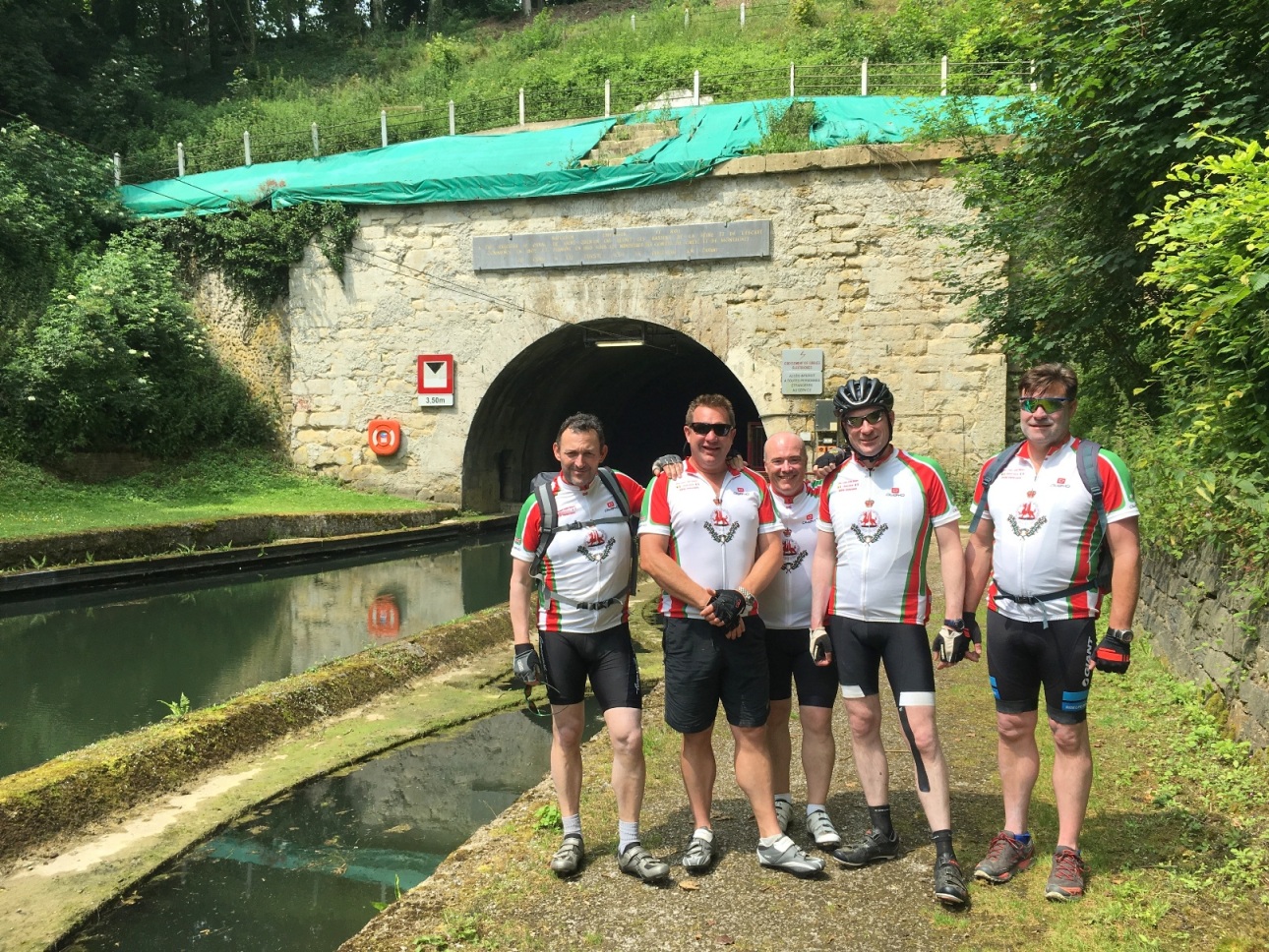 Our focus was on the 15th Lancashire Fusiliers’ attack on the village on 30 September as well as war poet, Wilfred Owen’s MC action there over the subsequent two days. 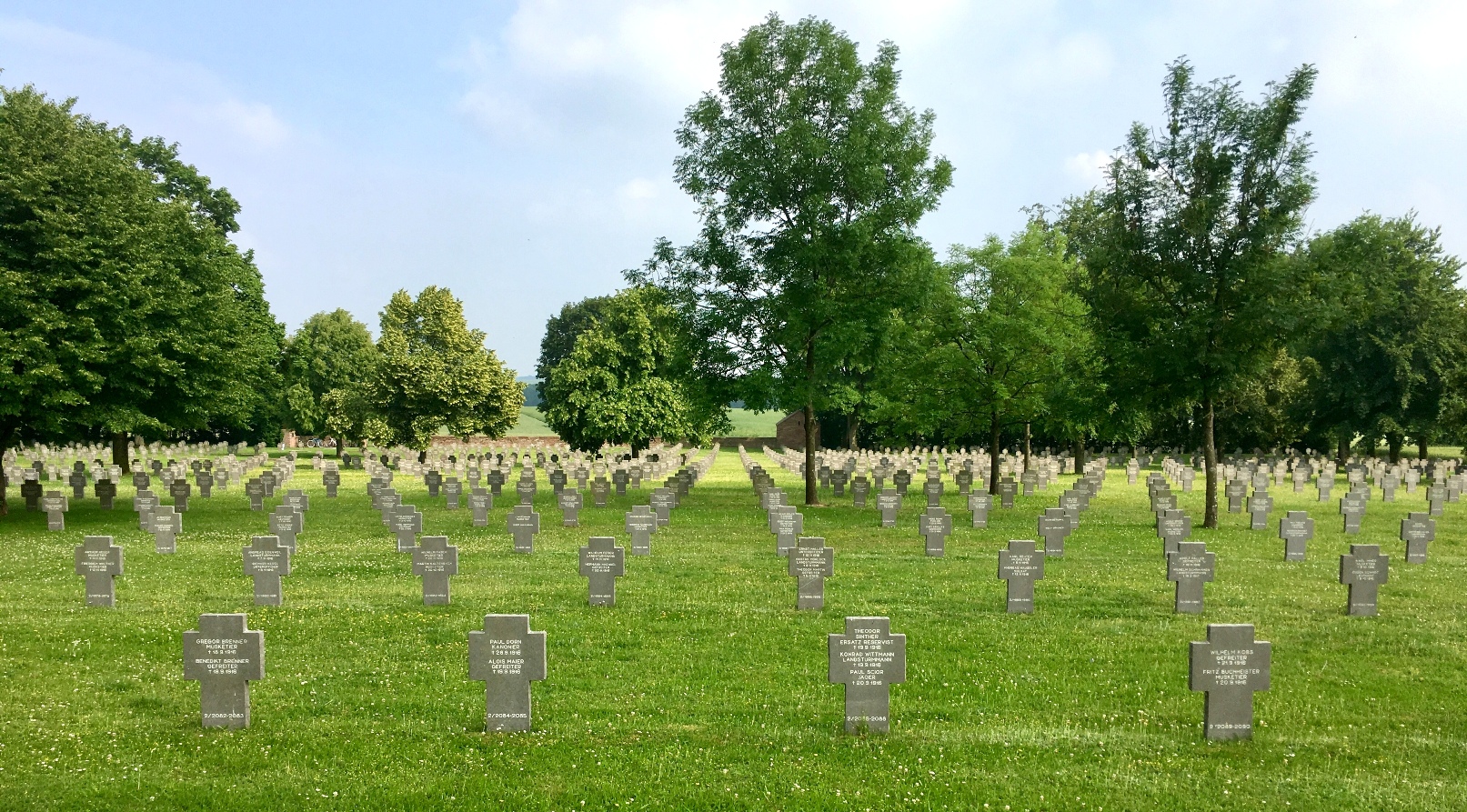 The huge German cemetery at Maissemy with over 30,000 burials offered a stark contrast to the beautifully maintained and more personal CWGC battlefield cemeteries. Heading north we rode through the villages of Villeret and Hargicourt before stopping at Templeux-le-Guerard to visit the grave of Major Valentine Fleming DSO MP, Queen’s Own Oxfordshire Hussars, father of Ian Fleming, creator of James Bond 007. From there it was a few kilometres back to Epehy and our cars. 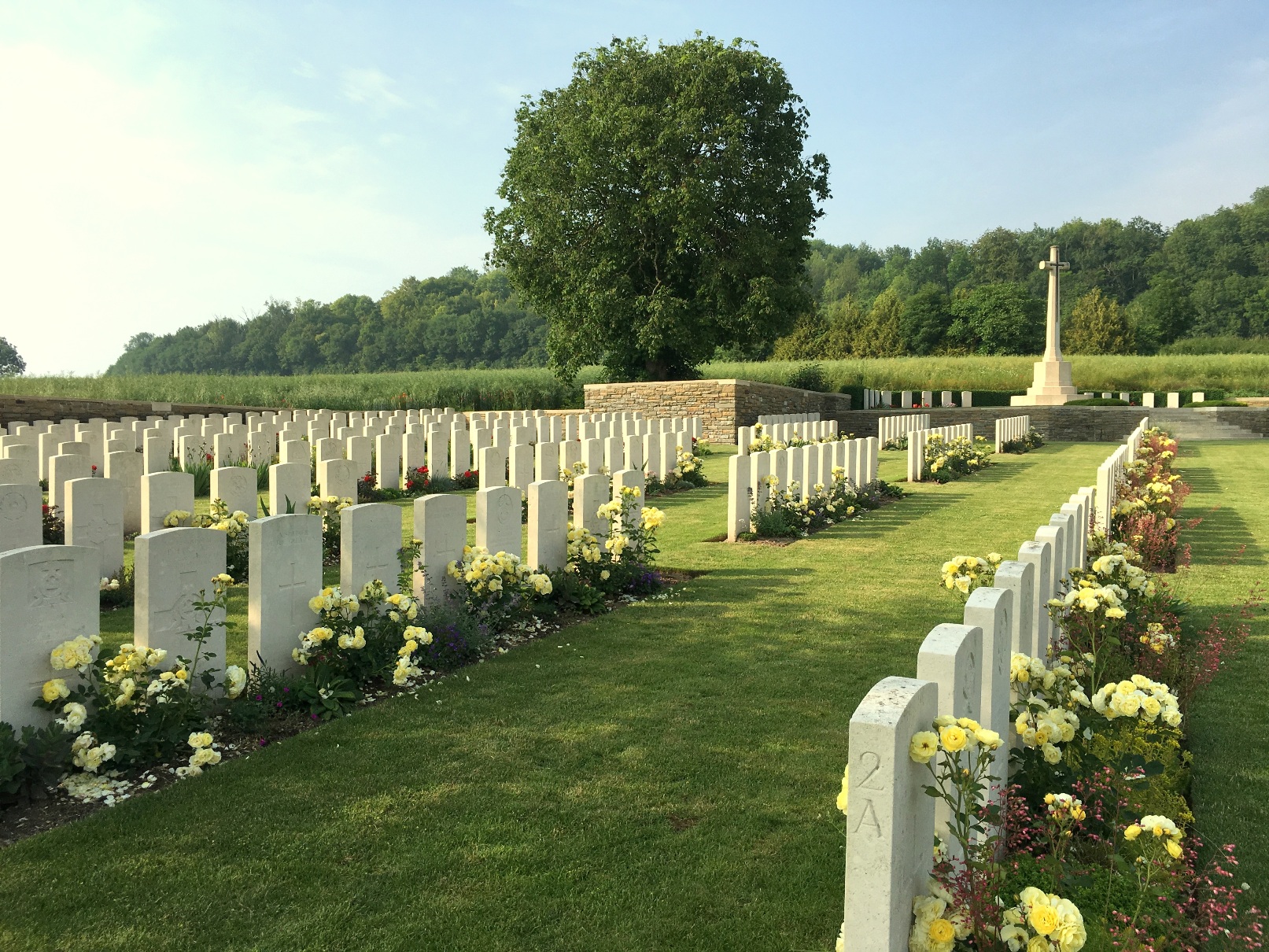 Breaking the Drocourt-Quéant Line and crossing the Canal du Nord on the trail of the Canadians, August – October 1918

Our final day started in the small village of Chérisy looking at the Canadian advance from Arras to Cambrai. Previous days had started with a mist which burned off by mid-morning, giving way to beautiful weather. This day remained the exception with a mist that never quite cleared. However, quiet roads and tracks made it easy to traverse the battlefield as we headed up to Upton Wood before looking at the 15th Battalion (48th Highlanders of Canada)’s incredible attack on the Crow’s Nest which opened up the way to the Drocourt-Quéant Line, the breaking of which on 2 September 1918 was, in my opinion, Canada’s finest hour of the war. Riding along the tracks that criss-cross this area with densely sewn crops growing nearby it was hard to visualise the close-quarter and bitter actions that took place in those fields. The isolated Dominion Cemetery sitting right on the Drocourt-Quéant Line with so many men of the 16th Battalion who attacked through this spot bears testament to the ferocity of fighting.

Quickly crossing the ground given up by the Germans as they fell back to the Canal du Nord before following in Canadian footsteps by crossing the canal at Inchy-en-Artois we looked at their assault of 27 September. 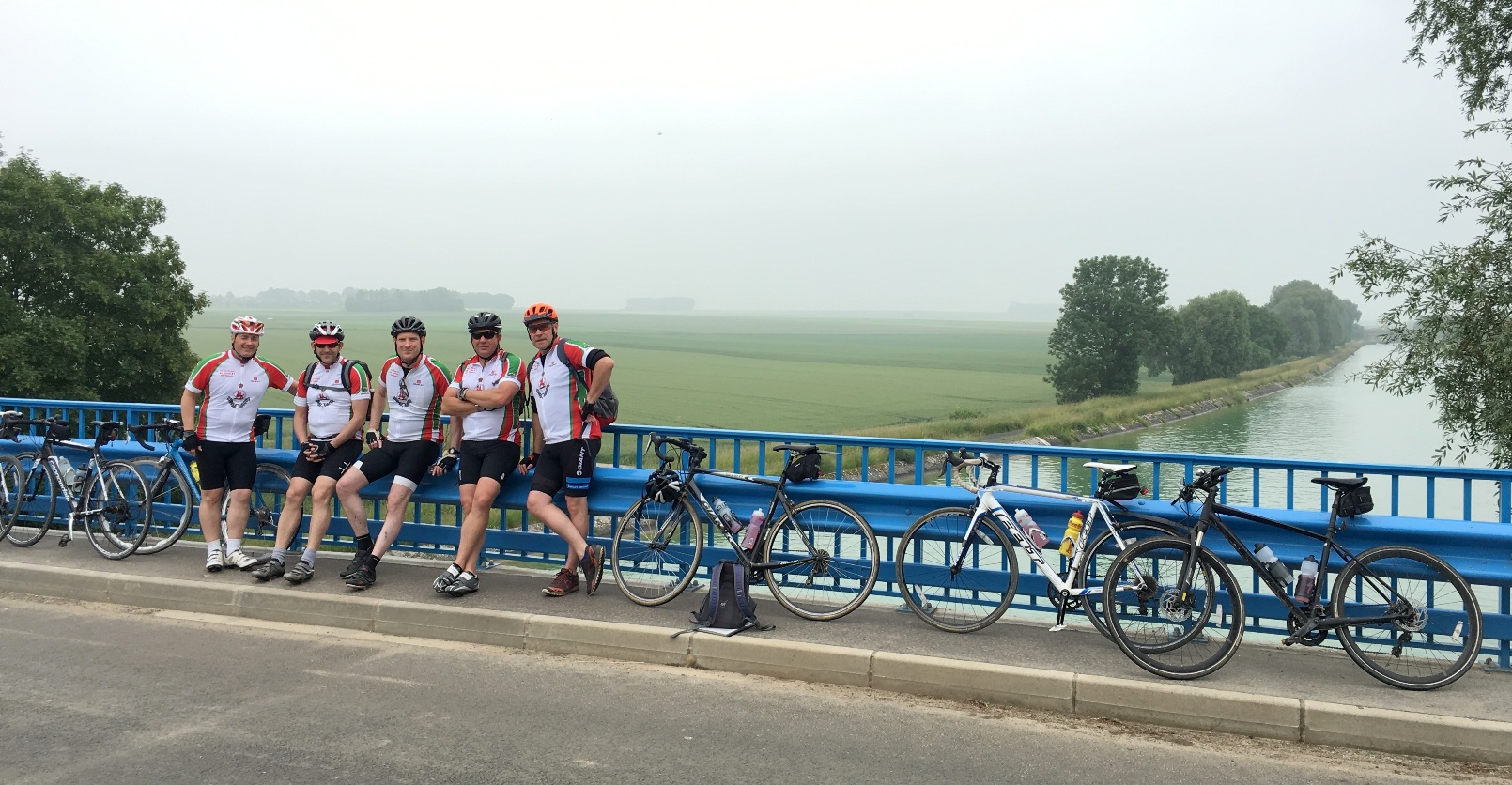 After a picnic lunch in the beautiful Quarry Cemetery we headed across to the key ground of Bourlon Wood before dropping down to Anneux. Between the two I told the group of the incredible endeavours of Lt Graham Thomson Lyall, 102nd Battalion ( North British Columbians ) who, in two days of operations, captured three officers, an astonishing 182 other ranks, twenty-six machine-guns and one field gun!

On the pavé to Sancourt British Cemetery

Looping northward we headed up to Sancourt with its cobbled track leading to the cemetery (a test for any cyclist) and its rows of 1st Division men including the grave of Native American, Private Albert Kick from Wisconsin, USA who enlisted in the CEF in 1916. 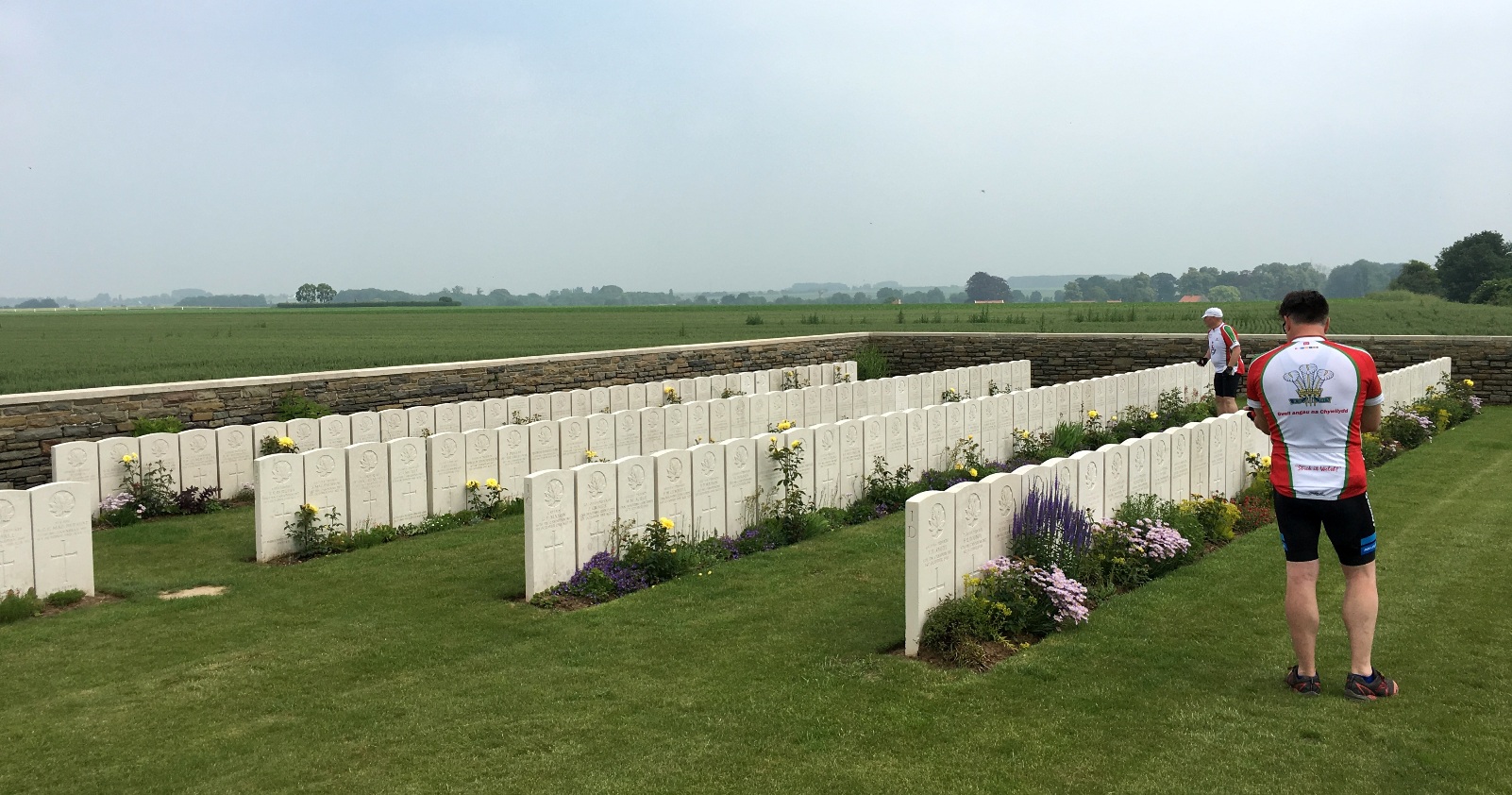 Working our way westward, we headed back across ground captured at such heavy cost including the village of Dury to our final stop at the Vis-en-Artois Memorial which bears the names of nearly 10,000 men who fell in the Last Hundred Days in the Advance to Victory in Picardy and Artois, between the Somme and Loos, and who have no known grave.  It seemed an apt place for our final stop – a nod of the head to those who had fought the Germans to a standstill in summer and autumn 1918. 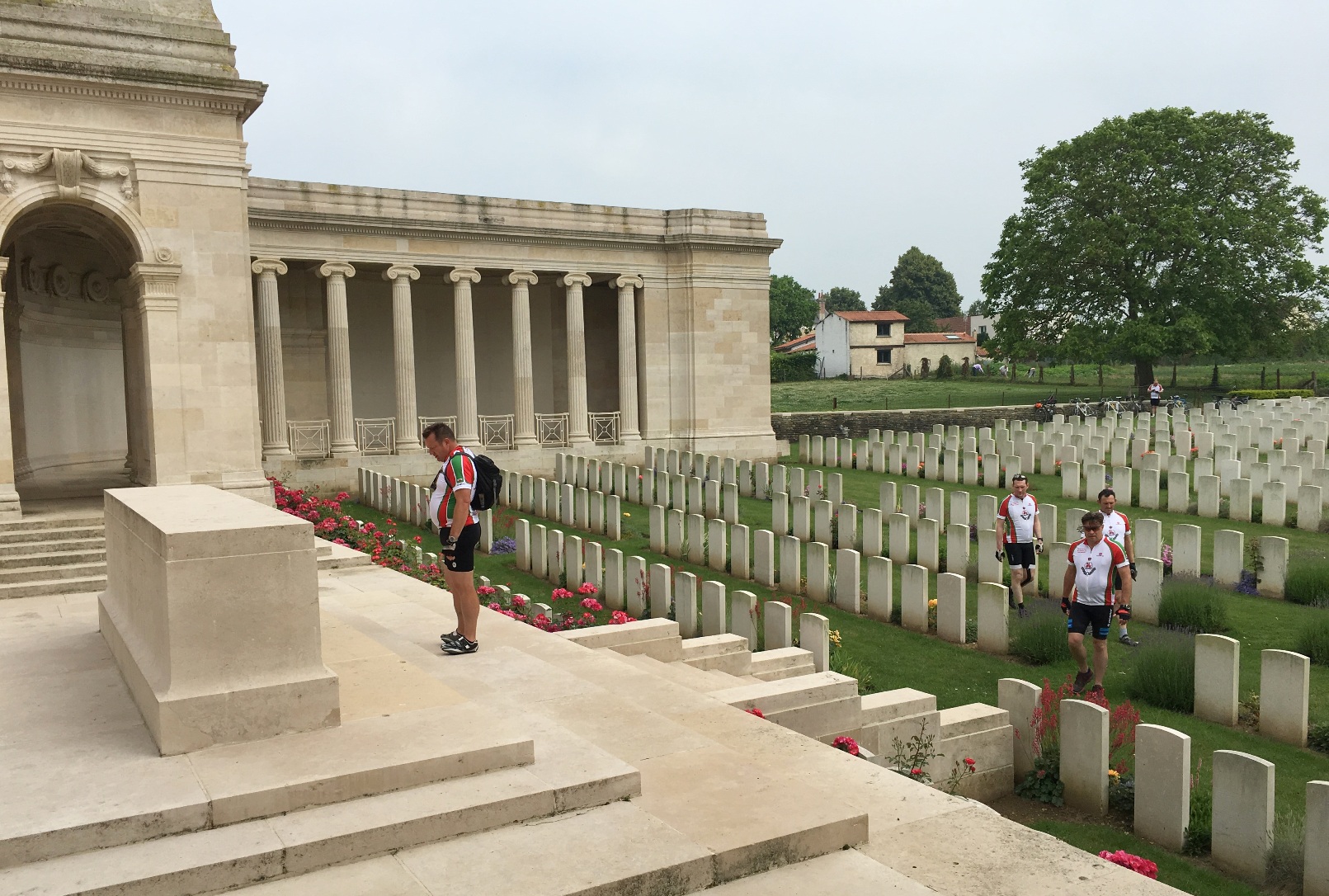 So much is made of Canadian success at Vimy Ridge – it can be argued that this is to the detriment of their other endeavours – that many are unaware of their key role in the Last Hundred Days of 1918. These actions, so often overlooked, produced over 46,000 Canadian casualties. An astonishing figure from only four divisions and one that should be better appreciated by Canadian and Briton alike.

A number of the group had cycled with me in previous years around the Ypres Salient, the Somme and Arras. The overwhelming feedback received was how much they had enjoyed crossing ground and appreciating distances and terrain involved as the British and Dominion armies advanced in the latter part of 1918. As former army officers they could fully appreciate the difficulties of manoeuvre across ideal defensive countryside. And as for me, I thoroughly enjoyed the opportunity to share some ‘new’ battlefields with clients. The men of 1918 really do deserve it.

Testimonials
“Thank you once again for another fantastic trip! All of the guys loved it. The areas you covered and the routes chosen were spot on, and even the tracks were relatively easily navigated by all – although I’m still amazed at how well a road bike can tackle mud!”

“Thank you for a brilliant tour – the perfect balance of historical interest and cycling. It was my first trip to the battlefields, but well worth the wait and you’ve got me hooked. Count me in for next year!”

It was a terrific three days with great company, many laughs and, on occasions, a few tears. We are all looking forward to next year’s trip. Now all I have to do is work out where we are going to cycle… 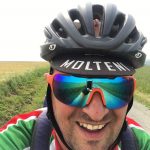