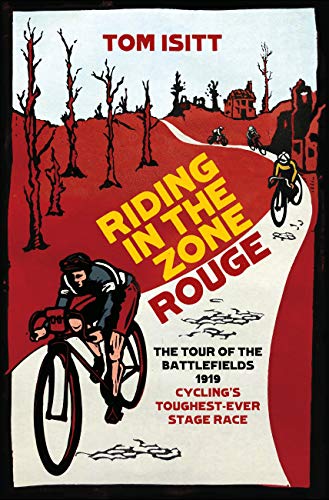 Tom Isitt’s new book has a weighty title to match the weighty race it follows. The Circuit des Champs de Bataille (Tour of the Battlefields) bicycle race was held in 1919, less than six months after the end of the First World War.  Covering 2,000 kilometres, it was raced through shattered countryside and an epically destroyed road system across an area known as the ‘Zone Rouge’.  It was so tough that only 21 riders finished.  Unsurprisingly, it was never staged again.

As is the way with so much of modern life, those with a shared interest seem to find each other via the internet, so I was already following Tom on Twitter and then met him at a BDOVELO function in London last year.  Aware of his cycling exploits in retracing the route of the race and wanting to know more about the Circuit des Champs de Bataille, I had been looking forward to the book’s release ever since.

The book has been structured in a pleasing and logical way, starting with details of the race, its inception and planning and, for the cycling geeks out there, the author’s choices regarding bike and kit for his cycling challenge.  Each chapter follows a similar structure with details of that stage, sections where the author imagines the conversations and feelings of the racers (really, very well done) followed by his account of retracing the route.  Primary source material for the race is relatively limited so the author has used newspaper reports alongside contemporary accounts of the battlefields (a decent bibliography is provided at the end) to paint a vivid picture.

As for the race, to attempt to ride over such terrain a mere six months after the armistice beggars belief. But to stage a race over these roads seems utterly bonkers.  As with so many tales of cycling’s early years, the length of each stage is eye-watering – 275km, 301km, 323km, 277km, 333km, 313km and a mere 163km on the final day.  Bearing in mind that on certain stages the route passed through areas recently deluged by monstrous shellfire, destroying roads, villages and infrastructure, it was a phenomenal undertaking.  Even when roads existed, heavy military usage had broken up the pavé, making every kilometre ridden a gruelling task.

Stage 3’s 323km from Brussels to Amiens offers a great example of the suitably mad nature of the race. Passing through Ghent and Bruges the race broke through the old Western Front line at Diksmuide, heading south to Ypres and the immortal salient before passing down through French Flanders to Lille, Douai, Cambrai then Bapaume, Albert and Amiens.  To traverse both the Ypres Salient and the Somme on one stage was a mammoth task – so arduous was its demands that some riders ended up sleeping in trenches and dugouts on the Somme, only to roll in the next morning.  The last men to finish the stage crossed the line some 39 hours after setting off! 39 hours!  I am shattered after five hours in the saddle!

The race threw up some unlikely heroes, most of all, Louis Ellner, the last rider on the road (Lanterne Rouge) who you will find yourself rooting for.  What made his endeavours even more incredible was that he was not competing on a race bike but on a pre-war routière.  You cannot but fail to be impressed with his determination as you see the gap between him and the leaders growing after each stage.  And yet, he soldiered on….

In summary, I loved the book, devouring it in a few night’s reading.  As with so much to do with the war, the same page can often be funny and poignant.  Tom has a good line in amusing stories and his tales of insufficient kit, hideous weather and a malfunctioning bike computer sat-nav raised plenty of chuckles from me.  Also familiar to cyclists will be his daily check of his ‘undercarriage’.  He has also cleverly included well researched information on the war’s battles, key events and individual’s stories.  It all blends together perfectly, offering enough ‘nodding along’ moments for current cyclists plus providing plenty of extraordinary information on early cycling, the race and the Western Front.  Neither cycling fan or war nerd (and I count myself as falling into both camps) will be disappointed.

Knowing the roads of the British sector well I particularly enjoyed reading about the French and American areas further south including the Argonne, Verdun and St. Mihiel.  Highly recommended.

A very good gallery of images from Tom’s trip is available on his website here: http://isitt.org.uk/14.html