Last Sunday was one of those great days when I managed to combine a bespoke battlefield tour with watching Stage 9 of the Tour de France. I was with clients (not on the bike this time) following 92nd Brigade, Royal Field Artillery from 1916–1918. Having visited Liévin and Vimy Ridge where they served from May – October 1918 and the area around Gouzeaucourt for for the Battle of Cambrai in November – December 1917 as well as retracing the route over which the Brigade retreated during the German Spring Offensive of March – April 1918 we had planned to incorporate a stop at the Tour into our final day in which we followed 92nd Brigade up Goegnies-Chaussée on the Franco-Belgian border where they reached to 11 November 1918.

92nd Brigade had been at rest in the village of Chérisy between Arras and Cambrai but moved forward to Cambrai at the very end of October. From there, at the start of November, they advanced eastward on the trail of the retreating German Army. Their movement tied in perfectly with Stage 9’s route and I had worked out the best place for us to watch – the first section of pavé (Section 15) between the villages of Escaudoeuvres and Thun-St-Martin.  The entry to the first cobbled section would be frantic and offered a terrific view. 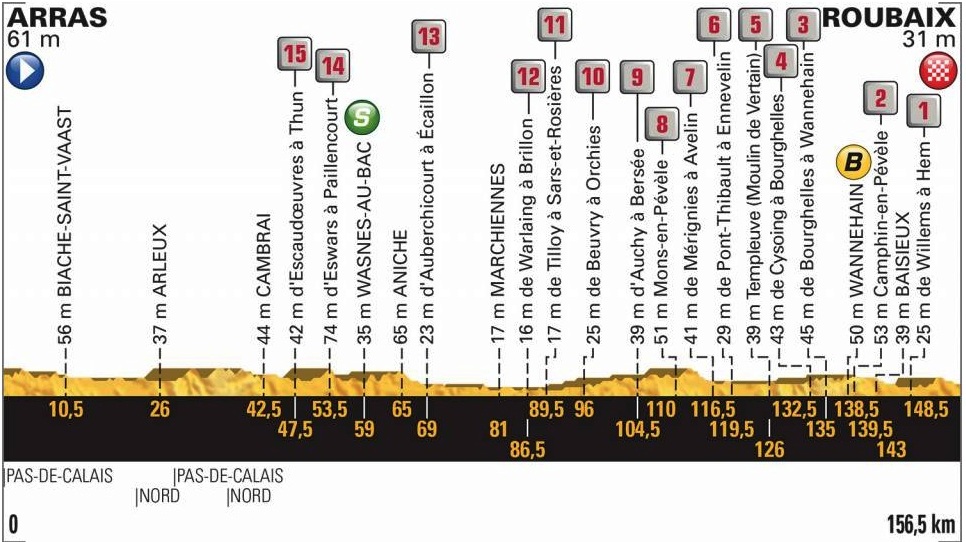 After a nail biting journey across country to make it there on time and a highly officious police cordon which meant a 3km jog (not to be recommended with sandals on) in order to watch the race, I made it with ten minutes to spare. 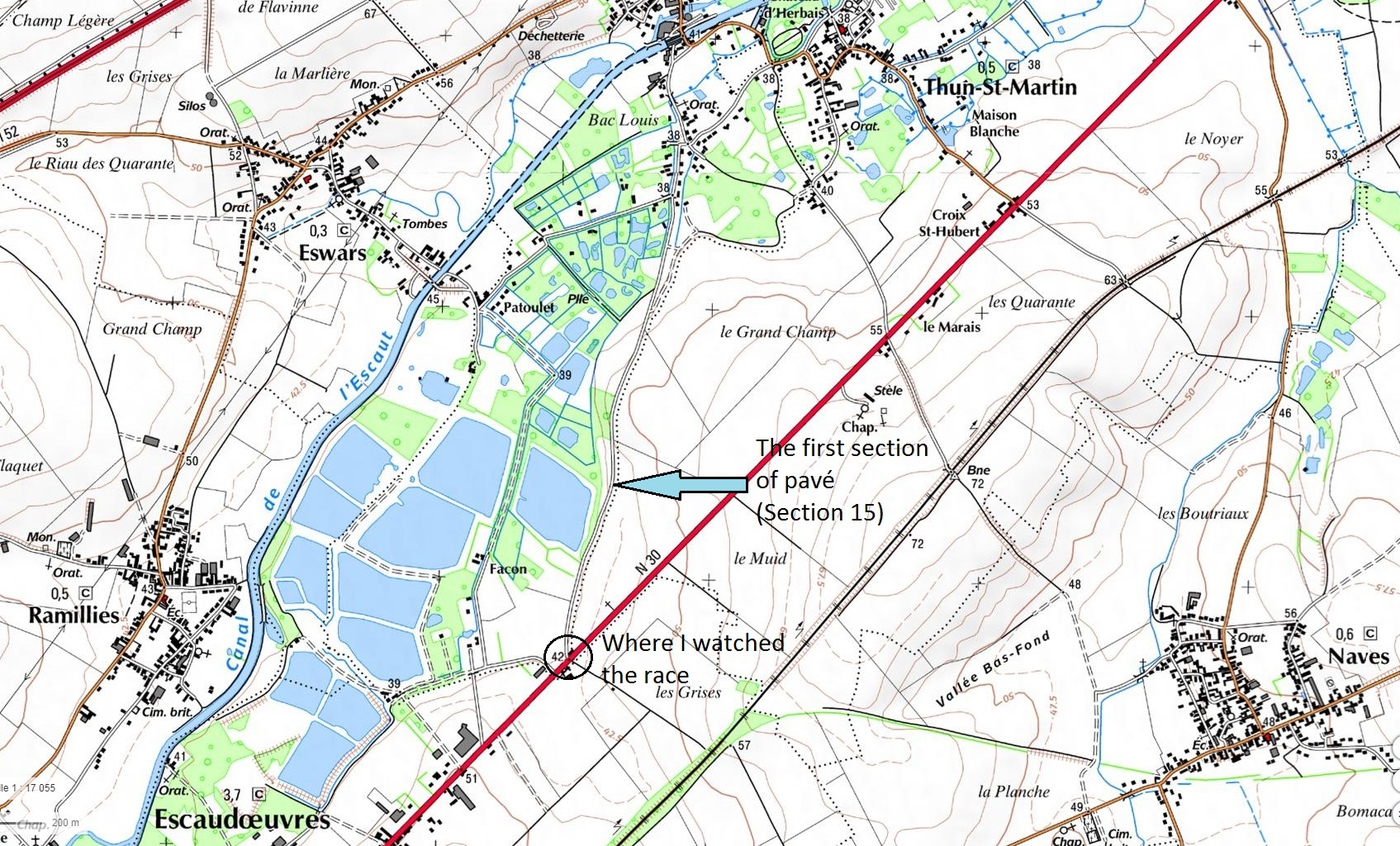 IGN Map showing where I watched the race

As ever, when watching pro riders, I marvelled at their skill and was astonished at the speed in which they came off the wide, dead straight Route National into the tight first cobbled section. Cycling fans know the thrill of seeing such incredible riders whizzing by. I snapped as many photographs as I could and a selection appear below. 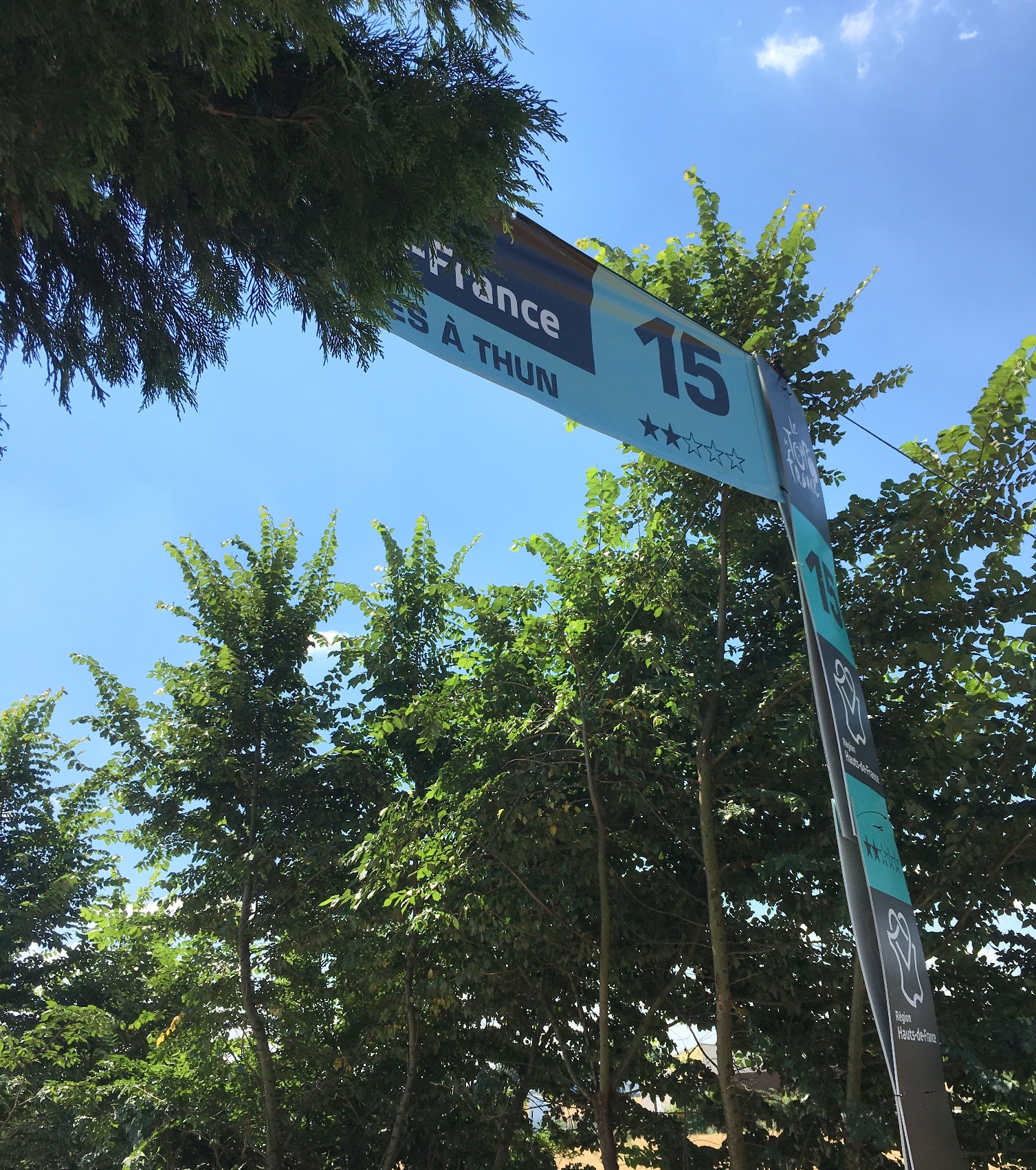 The entrance to section 15 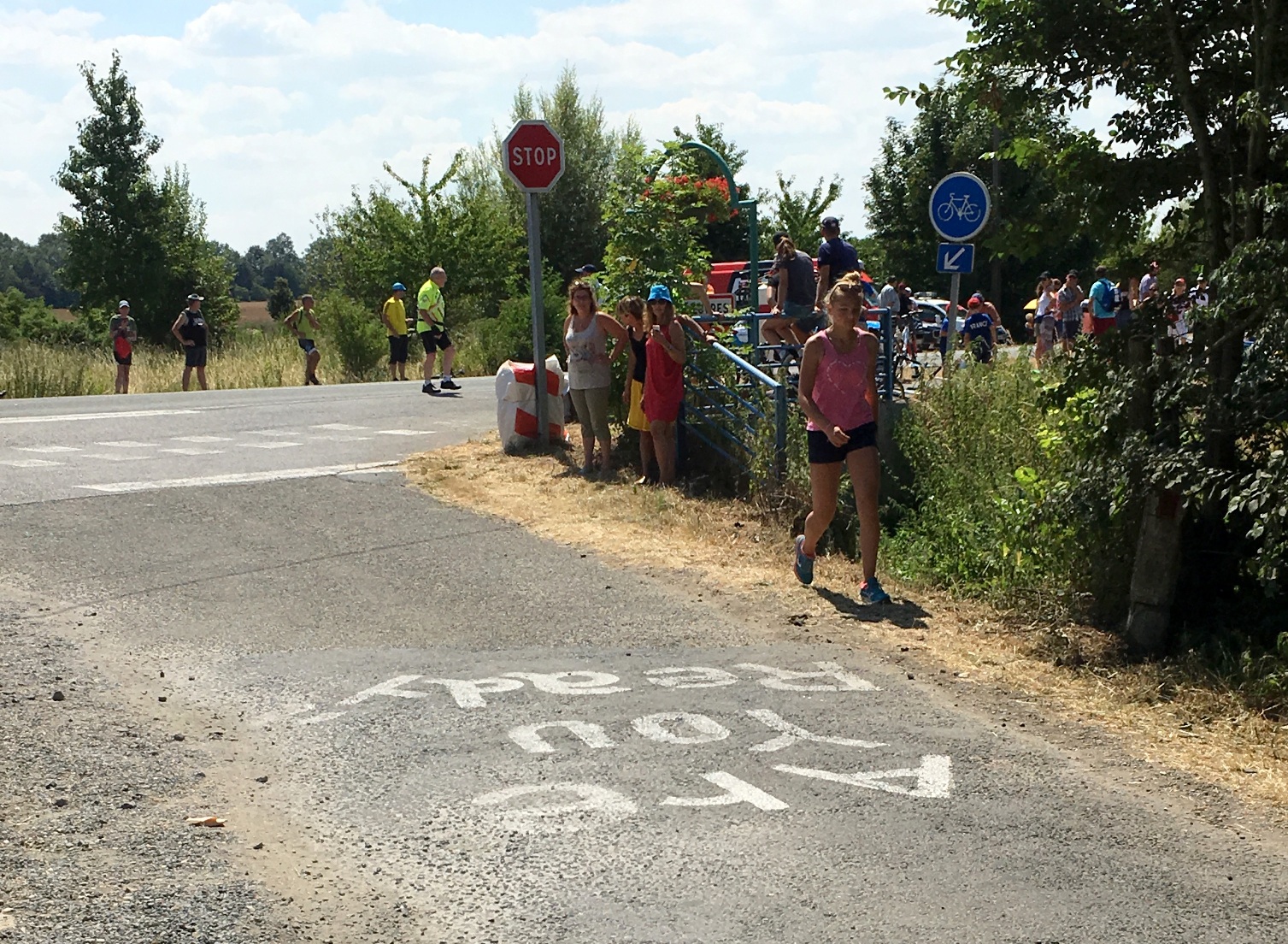 ‘Are You Ready’ painted on the entrance to the pave 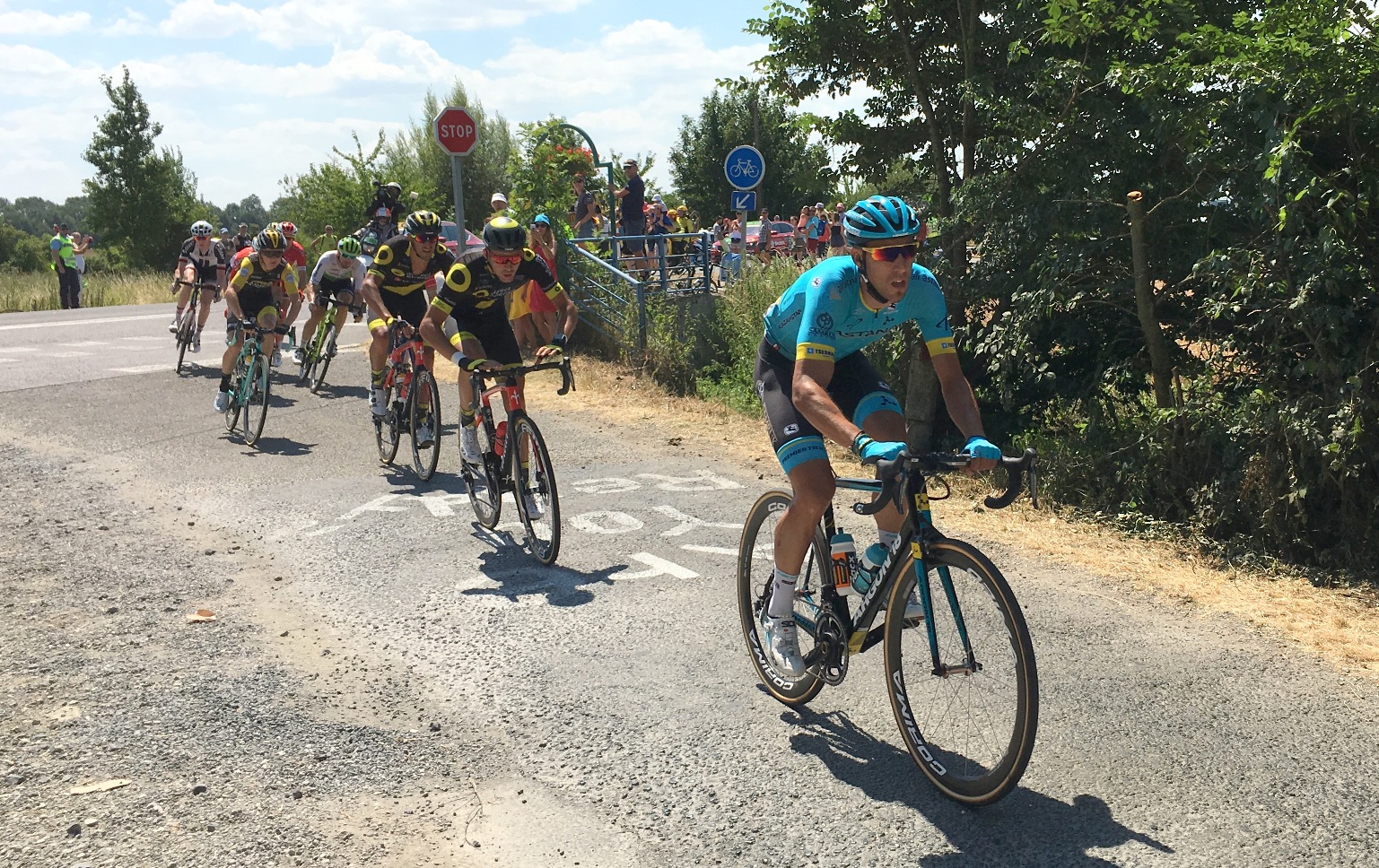 The breakaway came through over two minutes ahead of the peloton 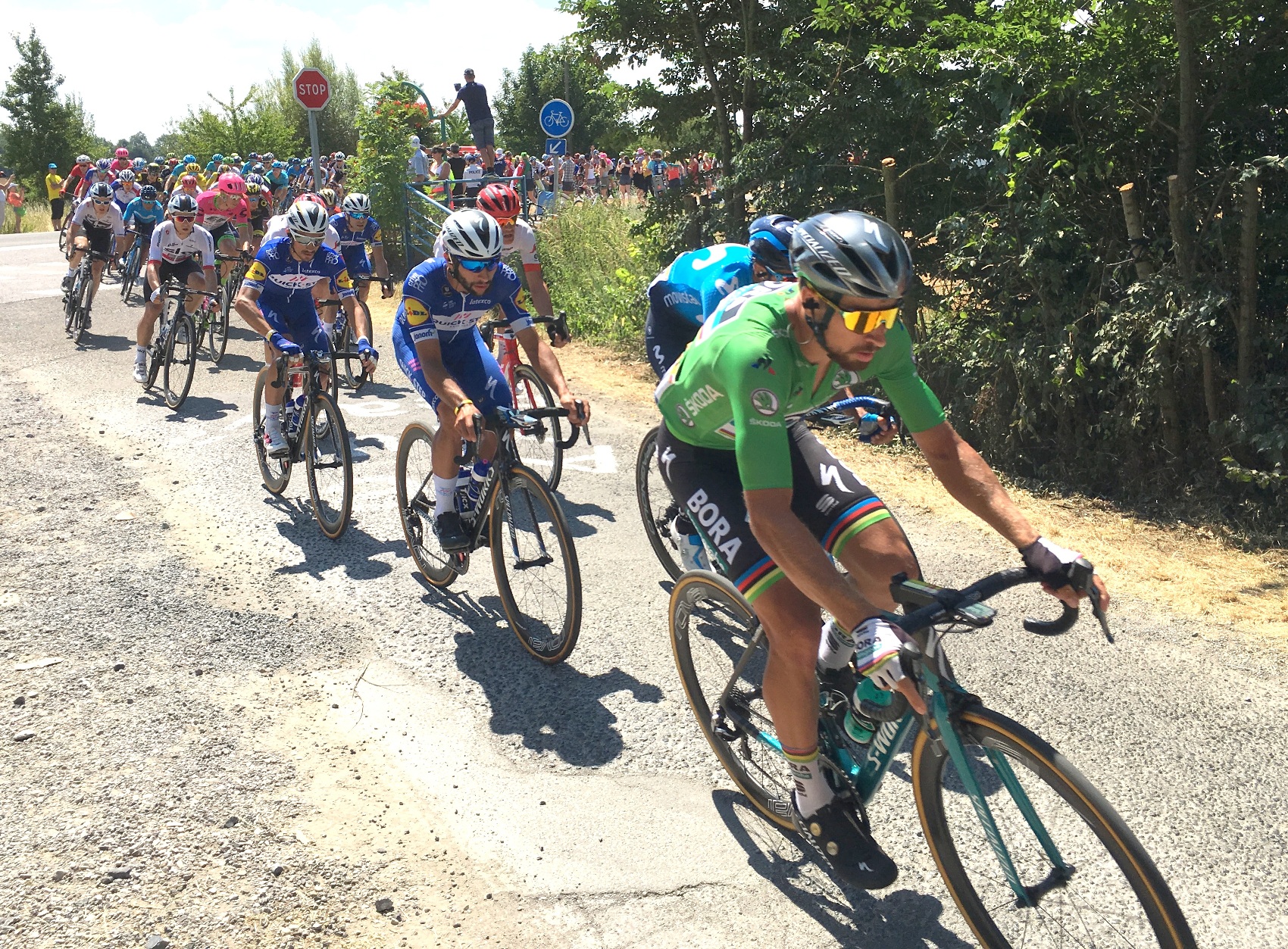 Sagan, Gaviria, Degenkolb and Kwiatkowski amongst others. Not a bad view! 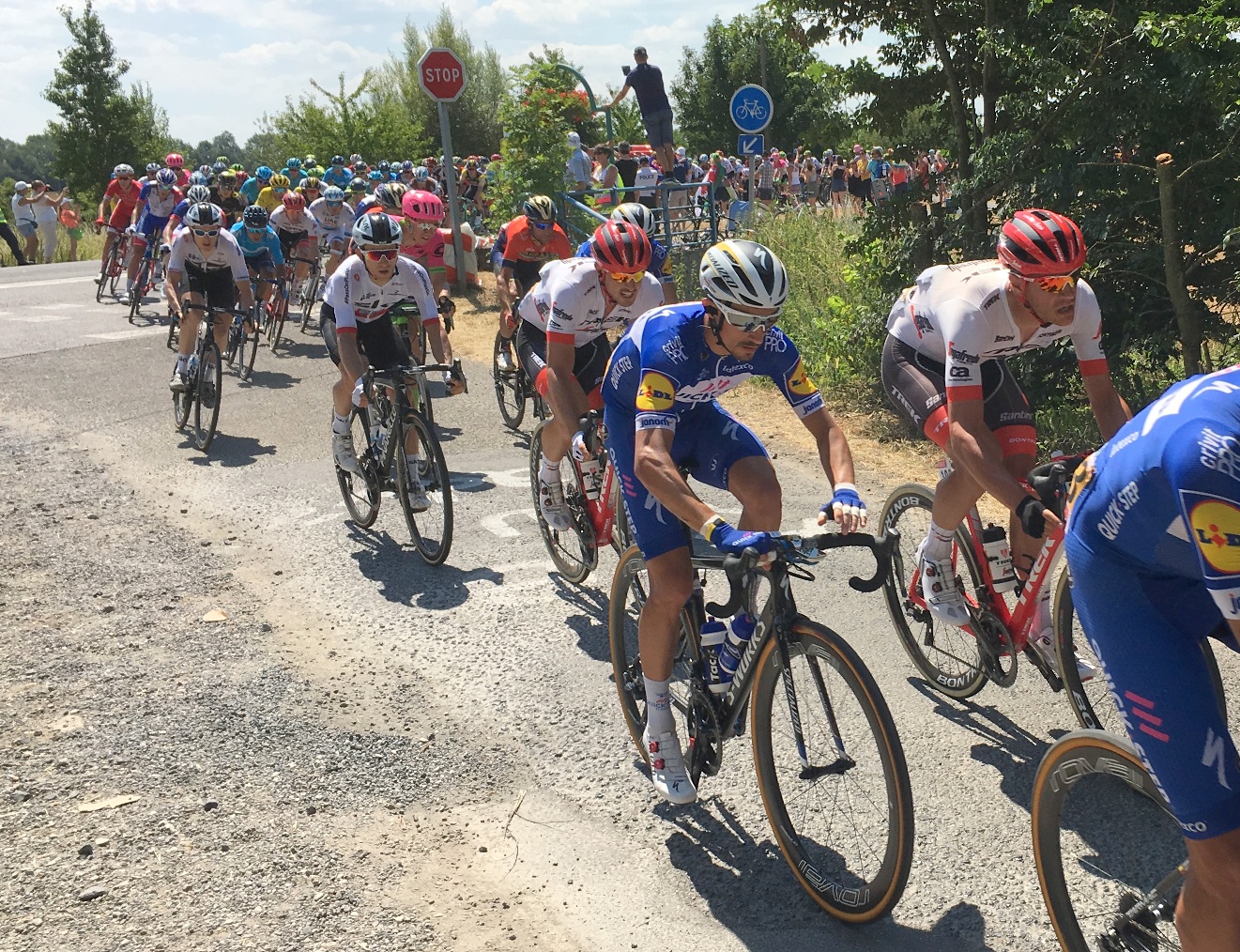 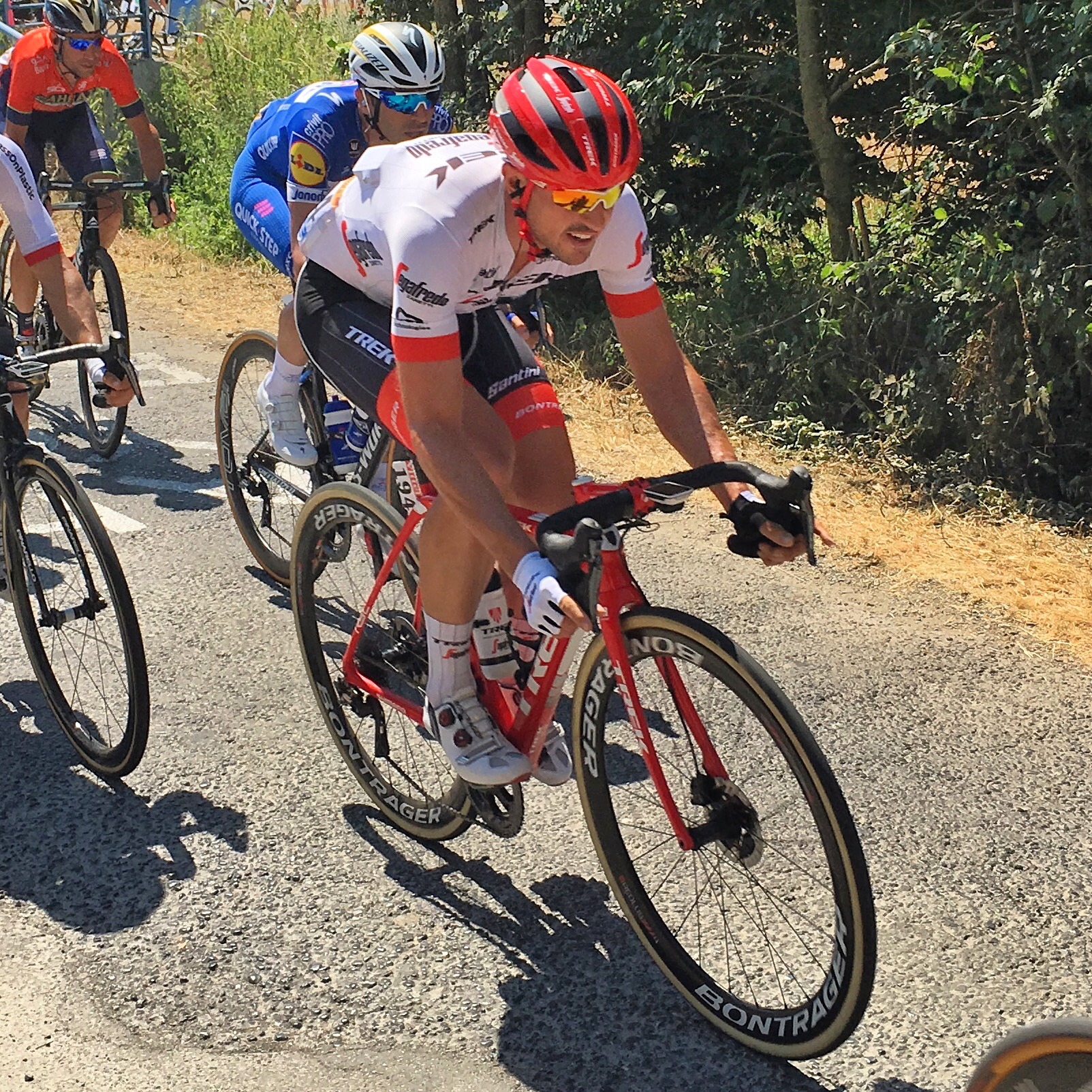 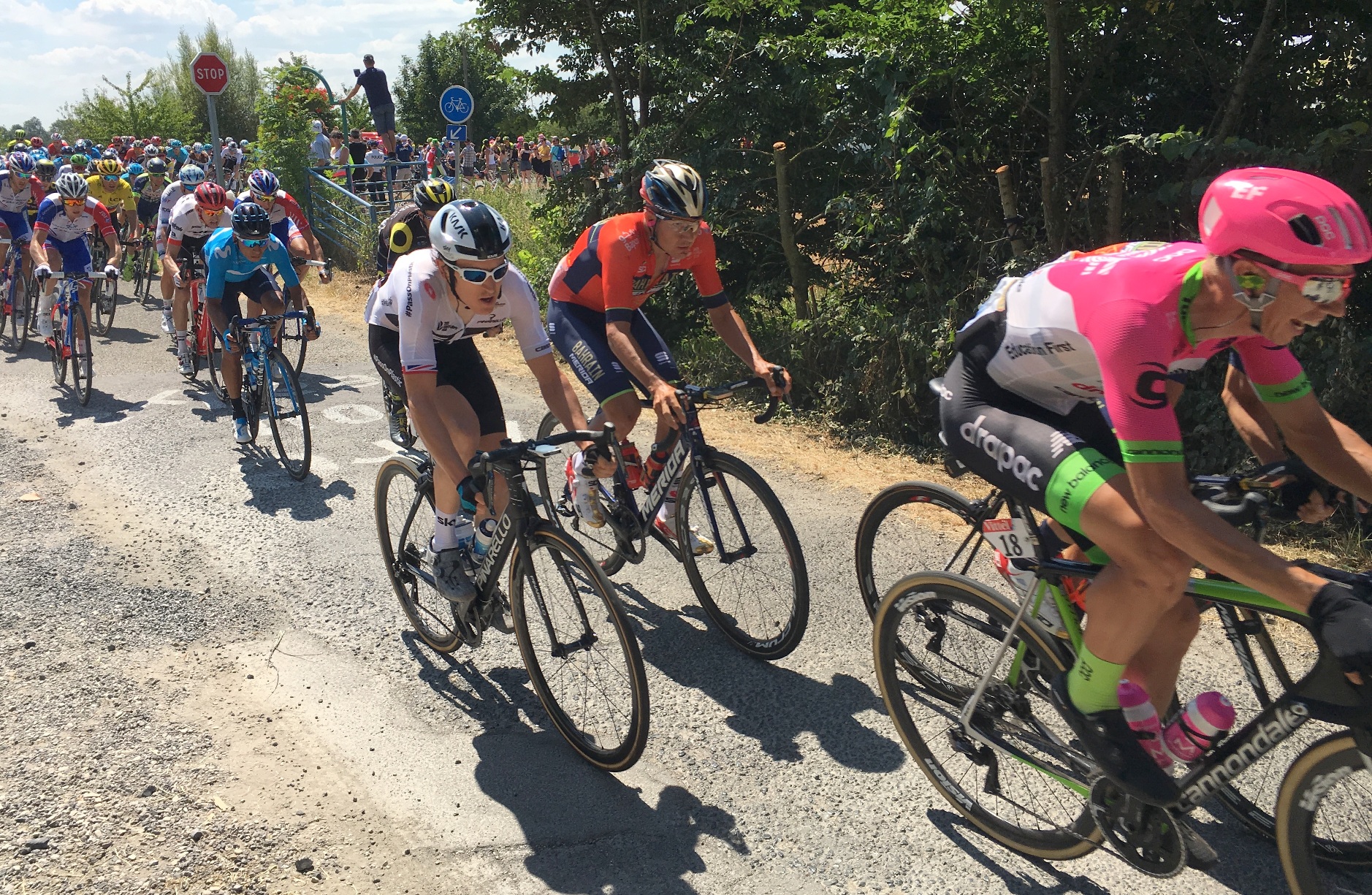 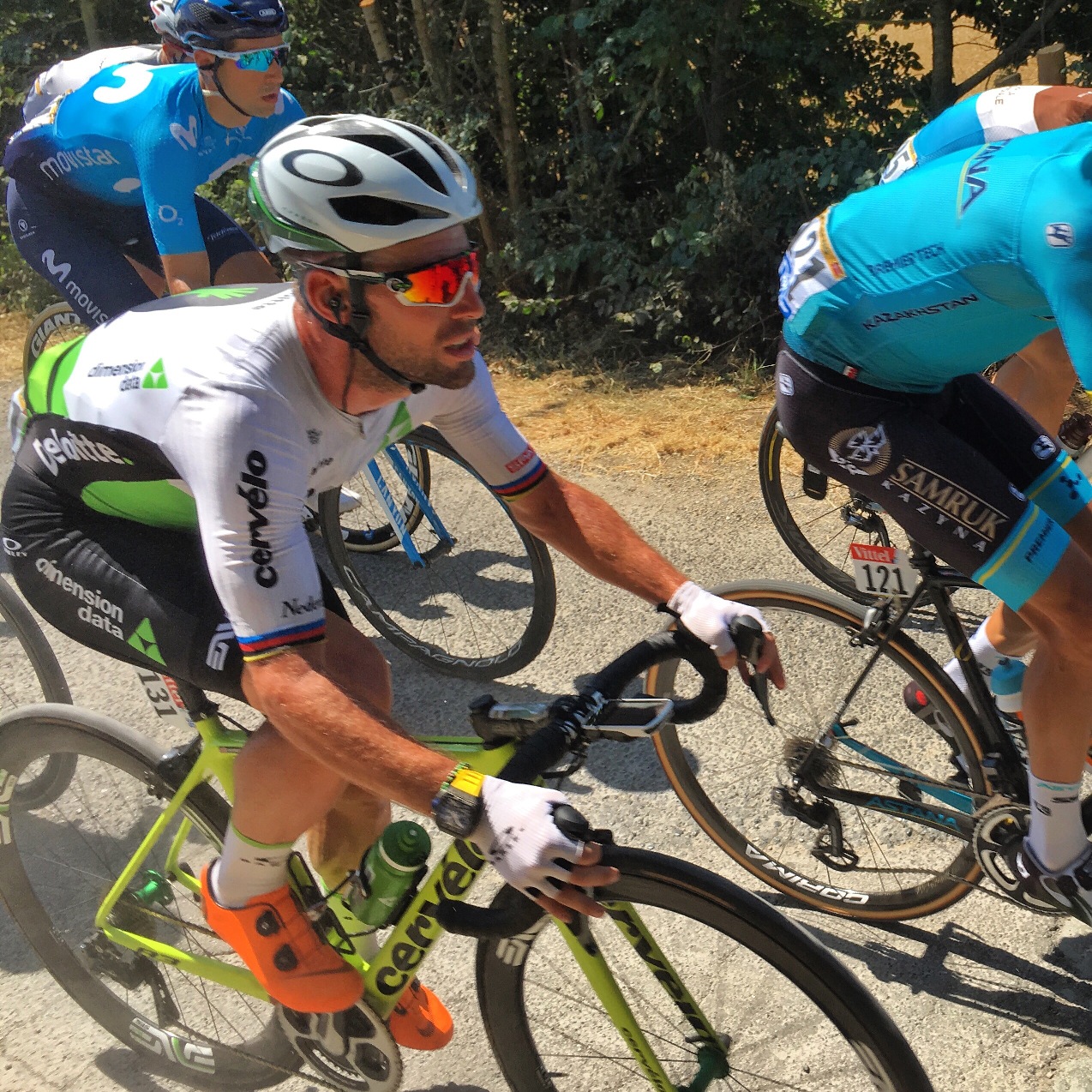 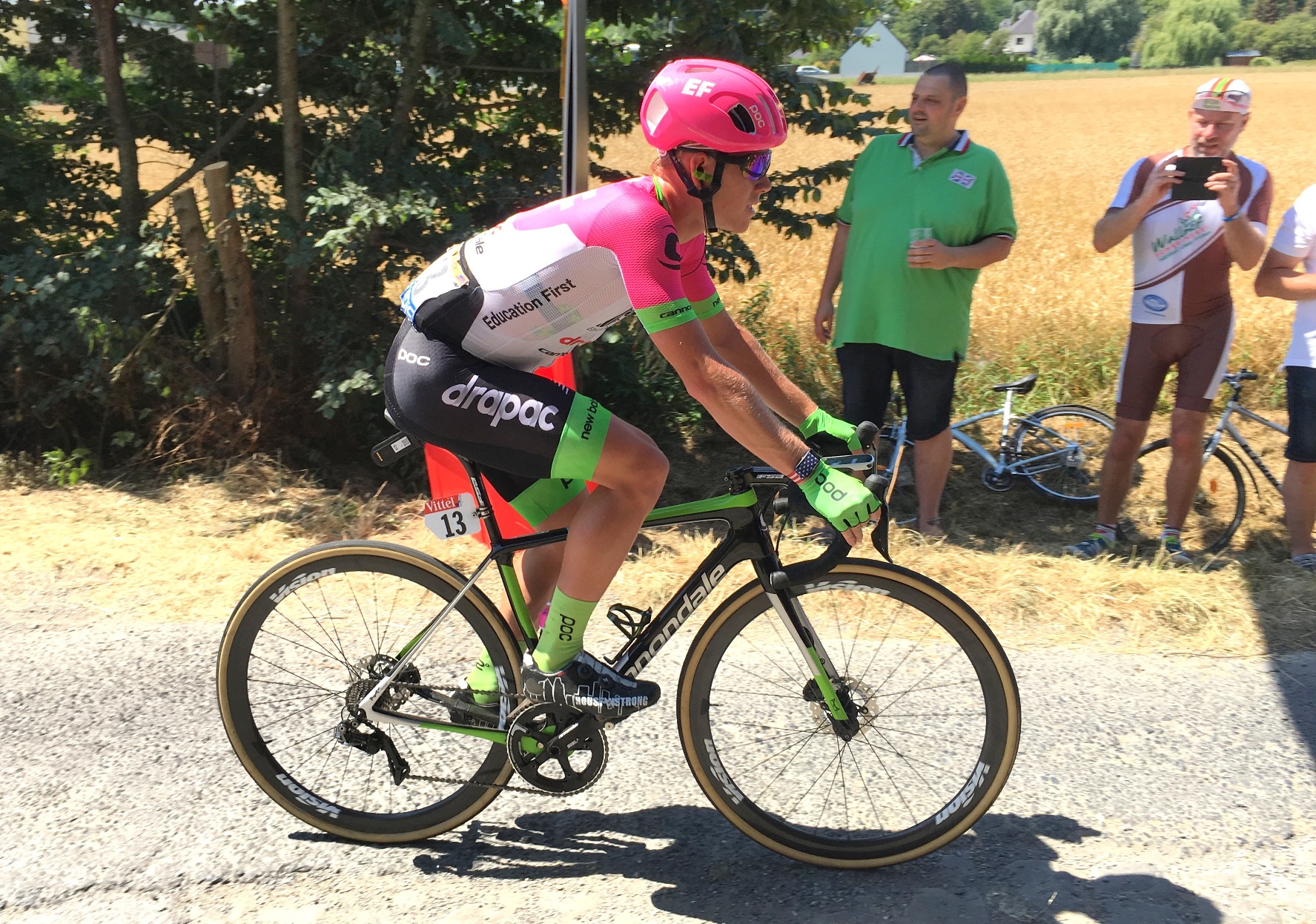 The section of pavé ran through the exact ground over which two companies of the 27th Battalion, Canadian Infantry advanced towards Iwuy on 9 October 1918. 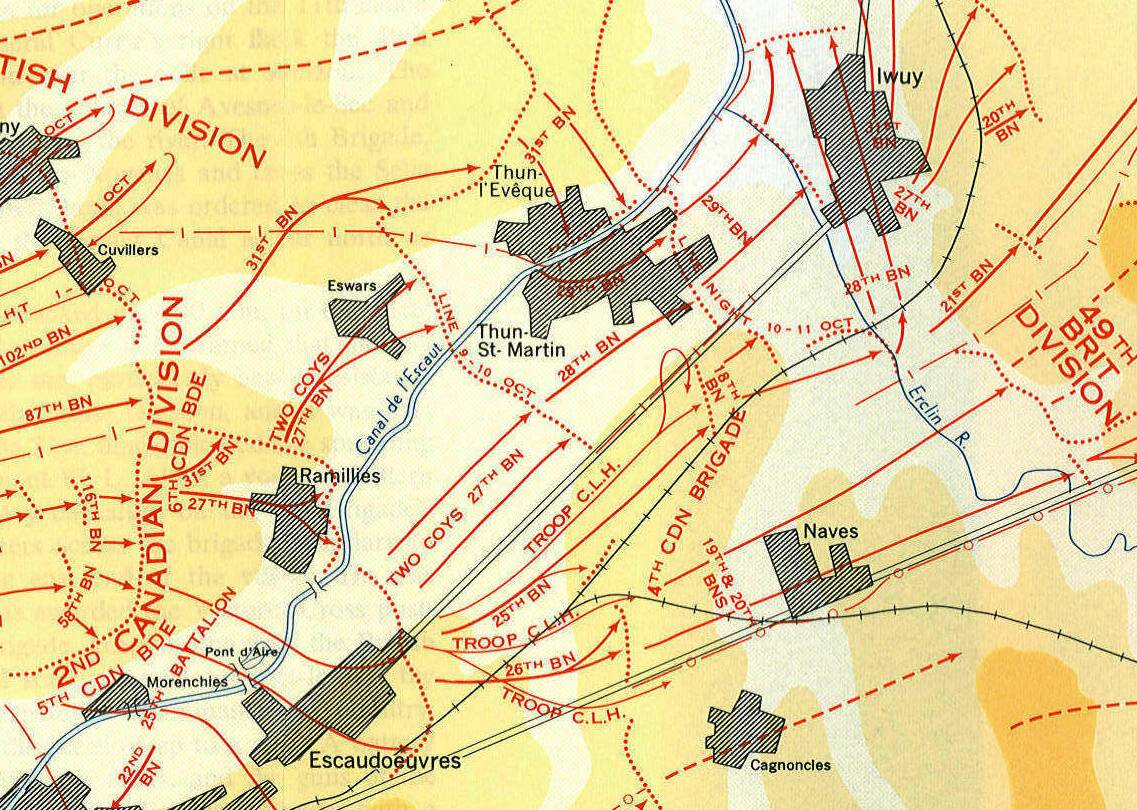 After we got back to the car we stopped for a late picnic lunch near Iwuy opposite Wellington Cemetery and the 19th Battalion memorial which commemorates their actions there on 10-11 October 1918. 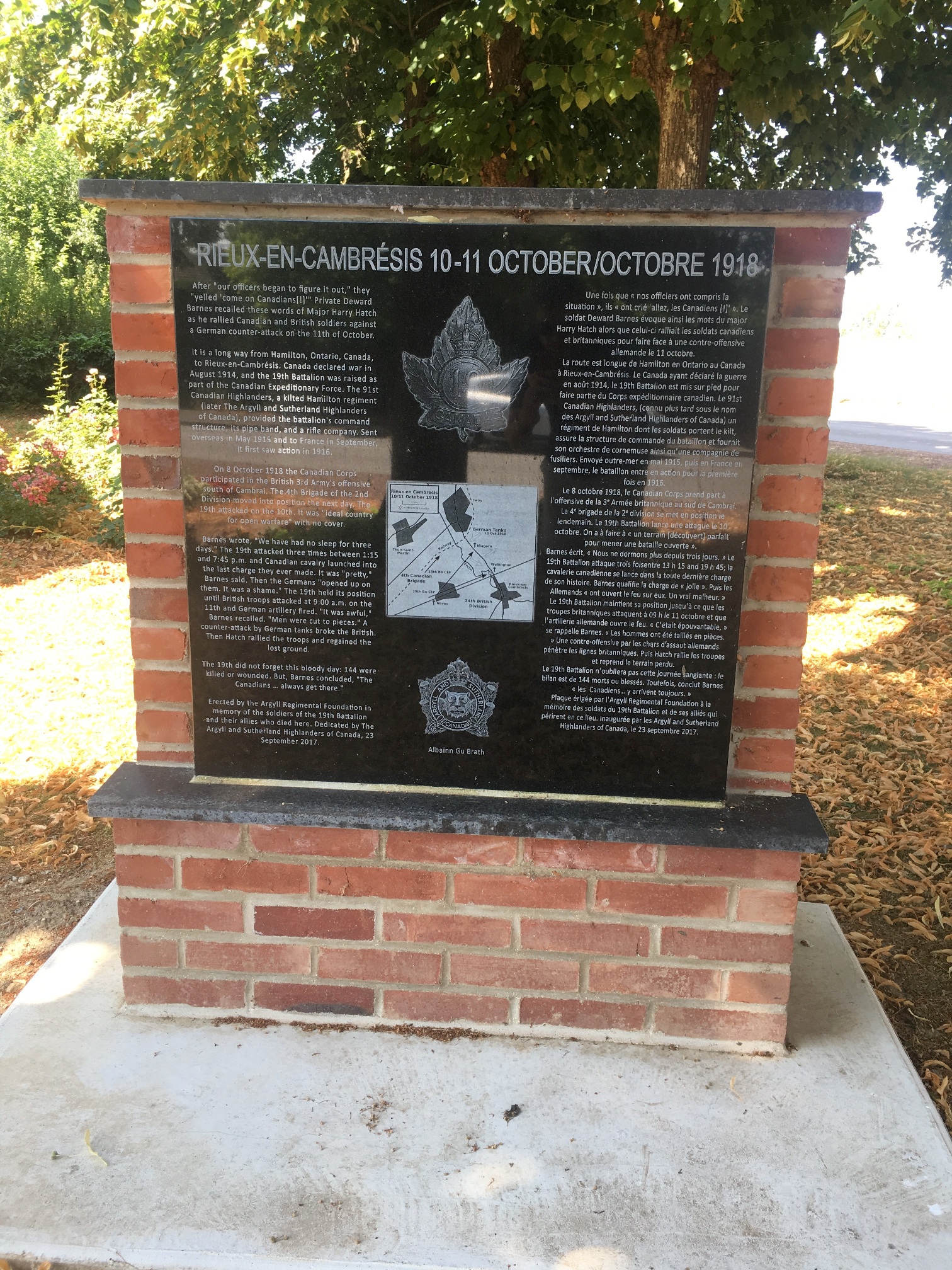 These roads, ridden on by the pros, can easily be weaved into a battlefield tour. I am currently working on a talk to be given at a few locations in September on the Canadian Corps in 1918. Their battlefield, so heavily fought over, covered much of the opening section of Stage 9.

Why not join me in cycling the battlefields and see some of these different areas whilst following in the wheel tracks of the pros? We won’t go as fast as they do but it’s a fascinating area that is brilliant to explore by bike.